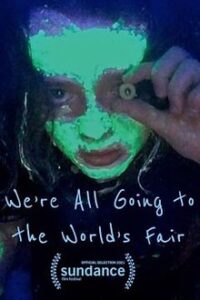 your computer camera. Prick your finger, draw some blood and smear it on the screen. Now

press play on the video. They say that once you’ve seen it, the changes begin…  In a small town, a shy and isolated teenage girl (Anna Cobb in a stunning feature debut) becomes immersed in an online role-playing game. Late on a cold night somewhere in America, teenage Casey sits alone in her attic bedroom, scrolling the internet under the glow-in-the-dark stars and black-light posters that blanket the

ceiling. She has finally decided to take the World’s Fair Challenge, an online role-playing horror game, and embrace the uncertainty it promises. After the initiation, she documents the changes that may or may not 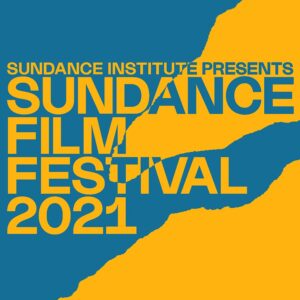 be happening to her, adding her experiences to the shuffle of online clips available for the world to see. As she begins to lose herself between dream and reality, a mysterious figure reaches out, claiming to see something special in her uploads. Director Jane Schoenbrun and lead actor Anna Cobb join us for a conversation on the making of this jarring, mind bending and strangely empowering tale of a young woman determined to challenge boundaries.

For more go to: fliescollective.com/were-all-going-to-the-worlds-fair

About the filmmaker – Jane Schoenbrun is a non-binary filmmaker who co-created ongoing touring variety series “The Eyeslicer,” which has screened in hundreds of venues across the world, including MoMA, the Tribeca Film Festival, and Kansas City’s oldest porn theater. In 2018, they created the Radical Film Fair, a film flea market and mentorship event that drew thousands of attendees. Schoenbrun is the director of feature documentary “A Self-Induced Hallucination,” producer on Aaron Schimberg’s “Chained for Life” an EP on season one of Terence Nance’s “Random Acts of Flyness,” and creator of the omnibus “dream film” “collective:unconscious. “We’re All Going to the World’s Fair” is premiering at the 2021 Sundance Film Festival

“Schoenbrun’s debut is one of the only American films that really excited me, in both ideas and film form, at this year’s Sundance Film Festival.” – Orla Smith, Seventh Row

“None of the formal inventiveness would work if it wasn’t grounded by a real person at its center. This may be her first feature, but [Anna Cobb] brings an immense amount of nuance to each moment.” – Drew Gregory, Autostraddle

“It’s a strong debut for both Schoenbrun and Cobb, capturing a profound sense of contemporary adolescent loneliness that many artists have tried (and failed) to portray on screen.” – Hannah Woodhead, Little White Lies

“This is a film of great and grand expression, transforming and challenging our own ideas and beliefs of art, of ourselves, and of others.” – Bill Arceneaux, Of Those Who

“Cobb and Michael J. Rogers both deliver haunting performances here. Cobb introduces enough vulnerability in the beginning to make her slow transformation into someone almost unrecognizable all the more terrifying.” – Alysha Prasad, One Room With A View