What Would Sophia Loren Do? is a documentary short film that 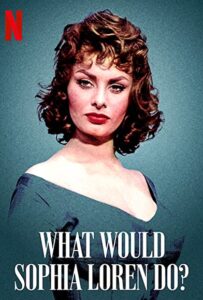 follows Vincenza “Nancy” Kulik, an Italian-American mother and grandmother living in Fort Lee, New Jersey. Nancy has seen her share of tragedy, but she has always been able to stay positive, inspired in part by another Italian mother, the movie star Sophia Loren. Nancy uses the question “What Would Sophia Loren Do?” as a guide to questions big and small. For example, “Would Sophia Loren eat whole wheat pasta?” Nancy thinks not. This phrase can also provide comfort and a source of strength in times of crisis. In 2016, Vincenza’s 51-year-old son died suddenly while undergoing a routine operation. Vincenza was devastated. She would seek

solace in the love of her friends and family. But as she describes it, Vincenza also used the example of Sophia’s grace to help her get through the days and find the strength to persevere. For Vincenza, the words “What would Sophia Loren do?” have truly helped her to heal during some of the

most difficult times of her life. Through the experiences of these two women we come to understand what it means to face life’s challenges with resilience and to age with courage, grit, and humor. The film debuts on Netflix on January 15 and is already heavily buzzed for the Oscar in the shorts category. There’s particular attention on Sophia this year, given her other Oscar-buzzed performance in The Life Ahead, directed by her son, Eduardo Ponti. Academy Award winning director Ross Kauffman (Born into Brothels, Tigerland) joins us to talk about the connection he shares with Vincenza, professionally and personally, and how her indomitable presence permeates this wonderfully alive story.

To watch: netflix.com/Wht Would Sophia Loren Do?