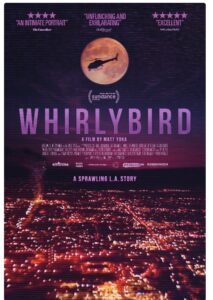 and valleys of one unique American family to the city of Los Angeles, showcasing their parallel growing pains and their search for a sense of self. Flying high above Los Angeles in a whirling news helicopter, Marika Gerrard and Zoey Tur (known then as Bob) captured some of the city’s most epic breaking news stories. The two recount the salacious details of their career as a husband-and-wife journalist team doing whatever it took to catch an unfolding story. Their camera captured the extreme adrenaline of the culture of live news and, as a result, the strain it took on their relationship—and, ultimately, a major life transition for Zoey. A wholly unique take on the story of Los Angeles told through stunning aerial 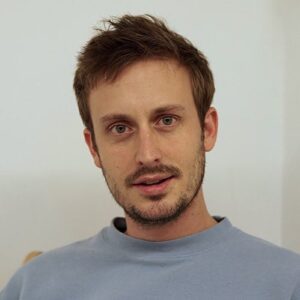 footage and remarkable home videos, WHIRLYBIRD reframes many of the city’s pivotal moments of the 1990s, including the O. J. Simpson pursuit and the 1992 riots. Zoey Tur revolutionized news media with her aerial reporting of Los Angeles – and in doing so, defined our recorded memory of the city. Tur’s unmatched eye-in-the-sky video archive

For news and updates go to: whirlybirdfilm.com

About the filmmaker – Director/Producer/Editor Matt Yoka is a Los Angeles-based filmmaker. He was a Collaborative Fellow at UnionDocs and in 2014 earned a master’s degree from USC’s Annenberg School of Journalism, where he was awarded a Pulitzer scholarship. Over the years, he has produced work for VICE, Vanity Fair, and The Awl. Matt began his career working on a wide range of TV with Vice Media (VICE DOES AMERICA, EPICLY LATER’D, HUANG’S WORLD, and the HBO special “WORLD IN DISARRAY”). During this time he also developed a distinct visual style directing music videos for record labels like Drag City and Sub Pop, collaborating most often with the artist Ty Segall. His first feature film, WHIRLYBIRD, draws inspiration from his childhood in Los Angeles and his research at USC’s Annenberg School of Journalism, where he received a Master’s Degree.

“A story of obsession, media madness and the price of fame, as well as a filmic incarnation of Jim Morrison’s “bloody red sun of fantastic LA”, Matt Yoka’s film Whirlybird is a strange and fascinating hybrid.” – Adam Sweeting, The Arts Desk

“Whirlybird serves as a documentary of LA over the years but it’s about Zoey Tur and Marika Gerrard’s relationship at its core.” – Danielle Solzman, Solzy at the Movies

“Whirlybird is informative and thrilling. It’s also profound and sad. And maybe it’s got threads of inspiration and uplift as well.” – Dan Fienberg, Hollywood Reporter

“Yoka spent six years sifting through and digitizing Bob’s archives, and even he may have been surprised to find that the micro story winds up being stronger than the macro one.” Elizabeth Weitzman, TheWrap