Interweaving lecture, personal anecdotes, interviews, and shocking revelations, in Who We 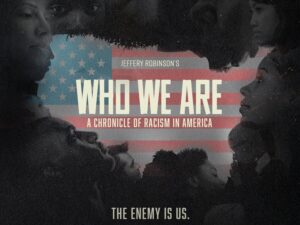 Are: A Chronicle of Racism in America, criminal defense/civil rights lawyer Jeffery Robinson draws a stark timeline of anti-Black racism in the United States, from slavery to the modern myth of a post-racial America. In Who We Are: A Chronicle of Racism in America, Robinson faces his largest audience, asking all of us to examine who we are, where we come from, and who we want to be.  Anchored by Robinson’s Town Hall performance, the film interweaves historical and present-day archival footage, Robinson’s personal story, and vérité and interview footage

capturing Robinson’s meetings with Black change-makers and eyewitnesses to history. From a hanging tree in Charleston, South Carolina, to a walking tour of the origins of slavery in colonial New York, to the site of a 1947 lynching in rural

Alabama, the film brings history to life, exploring the enduring legacy of white supremacy and our collective responsibility to overcome it. Co-directors Emily and Sarah Kunstler and Producer / Subject Jeffery Robinson join us for a conversation on the why and how American social, political and economic “progress” is inextricably entangled with the 400 year long suppression of black people and the systemic racism supported by many of America’s social and political institutions.

For in theatre and virtual go to: sonyclassics.com/film/whoweare

For news and updates go to: thewhoweareproject.org

More from the filmmakers at: off-center.com/who-we-are

About the filmmaker – Jeffery Robinson (Producer/Writer) is the founder and CEO of The Who We Are Project, which aims to become one of the central voices in correcting the American narrative on our shared history of anti-Black racism. The Who We Are Project will correct this false narrative and provide an objective and true account that exposes the role of white supremacy and anti-Black racism throughout American history. Reckoning with our true history is the only way for our country to move towards a path of racial equity and justice.  Jeffery is a former Deputy Legal Director and Director of the ACLU’s Trone Center for Justice and Equality. Since graduating from Harvard Law School in 1981, Jeffery has four decades of experience working on criminal and racial justice issues. In 2015, Jeffery joined the ACLU and on April 1, 2021, he left the ACLU and launched The Who We Are Project. Jeffery is a nationally recognized trial attorney and respected teacher of trial advocacy. Further, he speaks nationally to diverse audiences on the role of race in the criminal justice system and the history of anti-Black racism in this country. One of Jeffery’s groundbreaking presentations forms the basis of the feature-length documentary entitled “Who We Are: A Chronicle of Racism in America.”

About the filmmakers – Emily Kunstler (Producer/Director/Editor) and Sarah Kunstler (Producer/Director) are the founders of Off Center Media, a documentary production company dedicated to racial justice and social change. For over 20 years, sisters Emily Kunstler and Sarah Kunstler have been making films that have helped to stay executions, convince decision makers to reopen cases, and exonerate the wrongfully convicted. In 2009, the sisters completed William Kunstler: Disturbing the Universe, an award-winning feature documentary, which premiered at the 2009 Sundance Film Festival, and opened the 2010 season of POV on PBS. In 1999, the Kunstlers produced their first film,  Tulia, Texas: Scenes from the Drug War, a short documentary that exposed a racist drug sting that led to the incarceration of over 10% of the African American community of a small Texas town. The success of this documentary as a tool for organizing, advocacy, and ultimately, justice, inspired Emily and Sarah to form Off Center Media. Off Center exposes injustice through the creation and circulation of media. The recently completed production on Who We Are: A Chronicle of Racism in America , a documentary feature about 400 years of white supremacy based on a talk by renowned attorney Jeffery Robinson. For more go to: off-center.com

“The simplest thing to say about SXSW Documentary Spotlight Audience Award winner Who We Are is that it should be part of the standard curriculum in every school in America.” – Michael King, Austin Chronicle

“Robinson is a precise, empathetic and informed speaker and a righteous man who, in sisters Emily and Sarah Kunstler’s documentary, is every teacher you might have ever wished for as a student, but who deserves a larger stage.” – Fionnuala Halligan, Screen International

“Required viewing for everyone, even though there’s nothing particularly new in it.” – Bradley Gibson, Film Threat

“…(Jeffery) Robinson underscores the fact that many of the most revered figures of American history relied on, defended, and outright benefitted from the ownership of enslaved people.” – Michael Ward, Should I See It

“The movie features compelling interviews and information but puts an overwhelming emphasis on bigotry inflicted on Black men. The documentary should have been more inclusive of other people of color who experience racism too.” – Carla Hay, Culture Mix