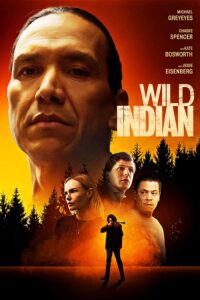 Makwa, a young Anishinaabie boy, looking for a way to escape his troubled life by playing with his friend Ted-O. One day Makwa shockingly murders a schoolmate, and the two boys cover it up. Now as adults, the two men must come to terms with what happened. Decades after covering up his classmate’s murder, Michael (Michael Greyeyes) has moved on from his reservation and fractured past. When

a man who shares his violent secret seeks vengeance, Michael goes to great lengths to protect his new life with his wife (Kate Bosworth) and boss (Jesse

Eisenberg) from the demons of his past. Director Lyle Mitchell Corbine Jr. joins us to talk about his debut feature film that showcases an amazing performance by Michael Greyeyes that brings to life a scathing study of trauma, anger, conciliated redemption in the context of “making it” in a colonial society.

To find out more about Wild Indian go to: Vertical Entertainment

“It’s clear there’s no happy ending in store…Yet there is undeniable joy in discovering a master of the screen acting art, buoyed by an insightful script and splendid cast, fully formed yet somehow just arrived.” – Bill Newcott, The Saturday Evening Post

“Whatever its merits as a self-contained and freestanding story, Wild Indian may one day be regarded as a major work, not just within the context of its director’s career, but cinema as a whole.” – Matt Zoller Seitz,

“No one involved comes through unscathed, including the viewer, but it opens a window to understand the pain that’s been inflicted on indigenous peoples. It’s a positive step for anyone willing to take it.” – Bradley Gibson Film Threat

“Wild Indian is a complex story that is meticulously crafted, touching on themes like generational trauma and abuse that refuses to shy away from the truth.” – Alysha Prasad, One Room With A View