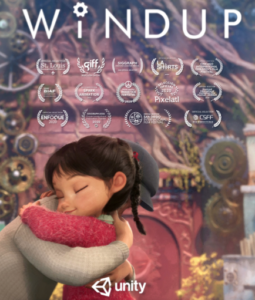 China, WINDUP, tells the story of a father trying to stay connected with his unconscious daughter through music. He plays a windup music box and hopes she can hear it while fighting with his own emotions to stay strong. Meanwhile, his daughter follows the melody in her dreams and looks for a way back. WINDUP is a nine-minute animated short written and directed by an emerging female Chinese filmmaker Yibing Jiang, and Animation Director Jason Keane. Keane has a long family legacy in animation, which includes, his grandfather Bill Keane (Family Circus comics) and his uncles Jeff Keane; and Glenn Keane,

(The Little Mermaid, Beauty and the Beast, Aladdin, Pocahontas, Tarzan, and Tangled). WINDUP was also a collaboration with

artists working remotely from around the world, created in real-time with Unity. At a time when we are feeling isolated, craving connection and preoccupied with the health and well-being of loved ones, the theme of the film is an uplifting and universal one that highlights the fragile nature of life, love, resiliency and the healing power of music, told through the eyes of a father and the special bond he shares with his ailing young daughter. Director Yibing Jiang and Artistic Director Jason Keane stop by to talk about their work and vision for this heartwarming and beautiful animated film.

To find out more or to watch go to: unity.com/demos/windup