In 2013, inspired by the book Wines of Lebanon by Michael Karam, filmmakers 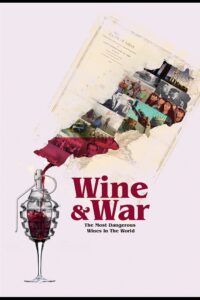 Mark Johnston and Mark Ryan set out to change the perceptions of the Middle East – and in particular the tiny nation of Lebanon – by examining an enigmatic and misunderstood part of the world with winemakers who had a story to tell. Co-directors Johnston and Ryan released their first award-winning documentary The Invisible Front, but by then, they were already in Lebanon recording stories of courage, adventure and determination. There, they met Michael Karam, and two became three. Wine and War: The Untold Story of Wine in the Middle East tells

the story that starts in the 2nd BC, when the Phoenicians, the ancient Lebanese, with their awesome trading empire gave the gift of wine to the then known world. They were the first wine merchants! In doing so, the Lebanese became the masters of crisis management, a skill personified by Lebanon’s winemakers who for thousands of years have gone about their work in war, famine, occupation and the constant hum of political instability. Co-directors Mark Ryan and Mark Johnston join us to talk about the amazing resilience of the Lebanese people and how wine is such a powerful thread in their shared history.

For news, updates and screenings go to: wineandwar.com

About the filmmaker – Mark Johnston is an executive producer and documentary filmmaker who is known for tackling a full range of near-impossible production challenges with a proven track record of creative development in complex and cross-functional multicultural environments. Mark has invested all his savings to make documentaries. He doesn’t own a home. He literally once moved into a mini van to save money to film a documentary. Mark’s passion for the work takes him to the farthest places on the globe and he always strives to do what he can to help each project realize its full potential. Big budget or big challenge, domestic or around the globe… Mark has done it all with calm collection and inventive problem solving be it feature film documentaries, TV campaigns, brand funded content, animated short films, live event programming, experiential projects, the Lanzarote Iron Man, En Svensk Klassiker, Vasaloppet, and the Stones 100k Ultra Marathon.

About the filmmaker – Mark Ryan, Director / Producer. Over the past two decades, Mark has been a producer, director, and cinematographer on five continents and the North Pole. Early in his career, Mark was part of a film crew that was the first in thirty years to be given unprecedented access to the Hopi Indians of Arizona. This experience cemented Mark’s desire to sensitively tell the stories of other people. Mark has a number of film credits under his belt including the James Beard Award-winning short films The Scent of Black and Stewards of the Land. He’s also served as a producer on the MTV hit show Pimp My Ride.  A Los Angeles native, Mark is a graduate of the University of Southern California with a BA in Cinema Production. He also holds a post-graduate degree from Central St. Martins School of Fine Art in London.  Today, Mark combines his love for adventure, travel, and hearing the stories of other people with best practices for capturing scenes of film to create stunning imagery for clients around the world.