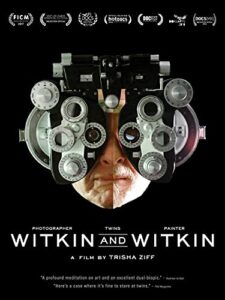 Witkins, identical twins born in Brooklyn in 1939. Painter and life-long educator Jerome and renowned photographer Joel-Peter may be brothers, but their lives, art and personalities could not be more divergent. Joel-Peter is a celebrated and highly controversial photographer whose Caravaggio and Dali–inspired arrangements, often constructed with cadavers and body parts, are transgressive and macabre. His identical twin brother, Jerome, is an equally acclaimed figurative painter, whose work explores political, social and cultural themes. Yet, for all their similarities, for much of their 80 years, the Witkins have willfully chosen to remain apart. Filmed over the course of four and a half years at five locations across

the United States — including the home where the Witkins grew up in Brooklyn, Joel’s home in Albuquerque, and Jerome’s home in Syracuse near the university, where he teaches fine art – WITKIN & WITKIN , which played such prestigious documentary festivals as Hot Docs, AFI Docs, DocFest and IDFA, chronicles the brothers’ decidedly separate paths as artists and as people, until, at their first-ever joint

exhibition they encounter an unexpected change in their artistic trajectories and self-perceptions, as well as their relationships with each other. Trisha Ziff (The Man Who Saw Too Much, Chevolution) joins us to talk about her intimate and intensely human film explores the themes of love, loss and distance, while showcasing the Witkins’ fascinating bodies of work.

For updates and how to watch go to: indiepixfilms.com

For news and updates go to: 212berlin.com/project/witkin-witkin

About the filmmaker – TRISHA ZIFF has worked for the last twenty-five years in photography as a writer, editor, curator and documentary filmmaker. Her first film as producer/writer was Oaxacalifornia (US/UK, 1995). In 2008, Ziff co-directed Chevolution, her opera prima for Netflix/Red Envelope, with Luis Lopez. Other credits include director and producer of The Mexican Suitcase (Mexico/Spain, 2011); Pirate Stories (2014), a series of shorts in filmed in London, Palestine, Dubai and Mexico City;  In 2015 she began collaborating with WABI PRODUCTIONS on her films; The Man Who Saw Too Much (2015) winner of Best Documentary and Best Score at the Mexican Academy Awards, Best Documentary at Monterrey International Film Festival, and the Press Award at Morelia Film Festival; Witkin & Witkin (2018), nominated for a Mexican Academy Award; and Oaxacalifornia: The Return (2020).  Ziff is now in development with WABI PRODUCTIONS on FRIDA’S GAZE, (2023) traces the narrative and history of ‘Fridamania’ and BRIDGET’S STORY, a woman worker in the fast food industry demanding $15 an hour minimum wage. Trisha  teaches film and media studies and guest lectures at various universities in the U.S., Mexico, and Europe. Her work has been supported by the National Endowment for the Humanities, Sundance Institute, California Humanities, IMCINE & EFICINE in Mexico, Ibermedia and the Irish Film Board. She is represented by WABI PRODUCTIONS in Mexico and internationally.

“Their individual processes and influences is great fodder for art enthusiasts, but the brothers’ peculiar and purposeful life-long estrangement is what gives the doc a through line.” – Radheyan Simonpillai, NOW Toronto

“Each unorthodox and unique in his own inimitable way, the Witkins make for compelling viewing in this bold, intimate portrait of their relationship.” – Christopher Llewellyn Reed, Hammer to Nail

“What makes the documentary work is its reflections over expression through art especially for the subjects who happen to be twins.” – Erick Estrada, Cinegarage

“The film unearths the insidious tensions that put pressure on their relationship until it almost dissolved.” – Luis Fernando Galván, En Filme