Wojnarowicz: F**ck You F*ggot F**ker is a fiery and urgent documentary portrait 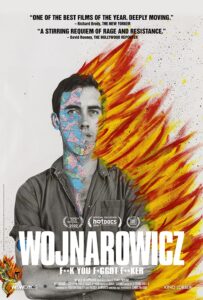 work and waged war against art world’s indifference to the plague until his death from is in 1992 at the age of 37. Exclusive access to his breathtaking body of work – including paintings, journals, and films – reveals how Wojnarowicz emptied his life into his art and activism. Rediscovered answering machine tape recordings and intimate recollections from Fran Lebowitz, Gracie Mansion, Peter Hujar, and other friends and family help present a stirring portrait of this fiercely

Chris McKim (Out of Iraq, Tammy Faye: Death Defying) joins us for a conversation on the life and times of artist David Wojnarowicz, why his art defied easy consumption and how his fury defined his art and challenged the straight world’s cruel ambivalence during the scourge of the AIDS epidemic.

For news and screenings go to: kinolorber.com/film/wojnarowicz

About the filmmaker – Emmy award-winning filmmaker & TV producer Chris McKim graduated from Penn State University’s film program in 1995. He soon hopped a train for New York City and began his career at Miramax Films where he worked till 2000, first as international marketing manager before moving to post-production. In 2001, he met Randy Barbato and Fenton Bailey of World of Wonder which was the start of countless creative adventures beginning with documenting the making of their scripted feature “Party Monster.” Chris was with former televangelist Tammy Faye Messner as she began chemotherapy while directing and producing “Tammy Faye: Death Defying” about her battle with cancer. He’s bounced around the world with Big Freedia as showrunner and executive producer of the docuseries “Big Freedia Queen of Bounce,” and for 4 years, he shared a cubicle with RuPaul, helping to create the ground-breaking juggernaut “RuPaul’s Drag Race” as showrunner & executive producer of the first 4 seasons. In 2016, he co-directed and produced the Emmy-winning documentary “Out of Iraq” which had a special screening at the United Nations hosted by US Ambassador Samantha Power. In addition to directing and producing the award-winning documentary “Freedia Got a Gun,” which was selected for the 2020 Tribeca Film Festival and premiered on NBC’s Peacock, he directed and produced the feature documentary Wojnarowicz: F–k You F-ggot F–ker about 80s artist, writer and activist David Wojnarowicz which was selected for the 2020 Tribeca Film Festival and Hot Docs.

“a wondrous, intimate, and often outrage-inspiring biographical portrait. Deeply moving. One of the best movies of the year.”  – Richard Brody, The New Yorker

“Evocative, first-rate… there’s considerable beauty and invention on display here, as often there was even in David Wojnarowicz’s most enraged work.” – Dennis Harvey, Variety

“Critic’s Pick! [An] exemplary documentary on the artist… which is also a mini-chronicle of the East Village art scene of 1970s and ’80s New York.” – Glenn Kenny, The New York Times

“Restless and bracing, Wojnarowicz gives a notorious life its due… leaves you breathless at the heights of personal expression he achieved.” – Robert Abele, Los Angeles Times