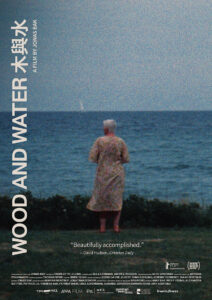 moves seamlessly from the tall spires of the Black Forest to the teeming skyscrapers of Hong Kong. Newly retired from her church job, Anke dreams of spending time with her grown children—including her uncommunicative and elusive son, Max, who has been living for years in Hong Kong, and who is unable to join his mother and sister back in Germany due to the ongoing pro-democracy protests. In a

daring decision, Anke, though suffering from loneliness and loss, travels to Hong Kong to find Max and perhaps also herself. The people she encounters, and her experience of the city help her to break down the inner walls she constructed years ago, and make way for a

new chapter in her life. In his hushed, wholly original approach to this fish-out-of-water set-up, Bak constructs a gentle, ambiguous fable of becoming, shot on 16mm and featuring a wondrous, naturalistic performance by his own mother, Anke Bak. Director Jonas Bak joins us to talk about the his mother in the leading role, working the chaotic political struggle taking place in Hong Kong into a very personal story and finding a cast of actors and mostly non-actors to bring out the intuitive talent Anke possesses.

For updates and screenings go to kimstim.com/film/wood-and-water

About the filmmaker – Writer, Director, Editor Jonas Bak was born in Konstanz in 1985, and now based in Freiburg, Jonas Bak studied film directing at Edinburgh College of Art before moving to London in 2015, and then Hong Kong in 2018 to work as a freelance film director and director of photography. He wrote and directed two short films, WANDERDRACHEN (2016) and ONE AND MANY (2017), both of which were screened at international film festivals including Molodist, Curtacinema Rio de Janeiro and Pacific Meridian. WOOD AND WATER (2021) is his first feature film.