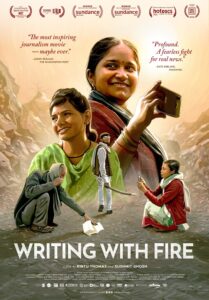 WRITING WITH FIRE focuses on India’s social environment built to divide based on caste and gender and a fearless group of journalists maintain India’s only women-led news outlet. Amidst rising Hindu nationalism, the Dalit women of Khabar Lahariya—all from the Dalit (“untouchables” caste)—prepare to transition the newspaper from print to digital even though many of their reporters don’t have access to electricity at home. Armed with smartphones, Chief Reporter Meera and her team of journalists confront some of India’s biggest issues—investigating cases of caste and gender violence, police corruption, environmental injustices, and more. WRITING WITH FIRE chronicles the astonishing determination of these local 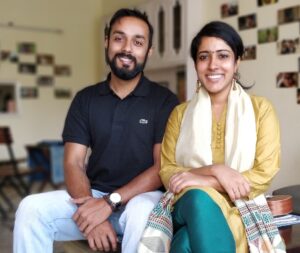 reporters as they empower each other and hold those responsible for injustice to account. Reaching new audiences through their growing platform, the women of Khabar Lahariya redefine what it means to be powerful. Co-

directors Rintu Thomas and Sushmit Ghosh join us for a conversation on the daily lives of these incredibly brave women, at home and on the road as journalist, gaining access and the trust of their community and how their work has served to demonstrate the power of a free press to improve lives and support a democratic society.

For news, updates and screenings go to: writingwithfire.in

Watch virtually until 11/28 at docnyc.net/film/writing-with-fire

About the filmmaker – Director / Writer / Producer Rintu Thomas is an award winning director-producer from India and co-founder of Black Ticket Films, an agency that has been recognized for its unique visual language. Rintu’s work is supported by the Sundance Institute, Chicken & Egg Pictures, IDFA, SFF Film Fund, Doc Society, Tribeca Institute, Finnish Film Foundation and Bertha Foundation, among others. Over the last 10 years, her shorts have ranged from themes of environment and public health to women’s rights and resilience of local communities towards climate change. Her notable multiple award-winning shorts are Dilli (2010) and  Timbaktu  (2012). Rintu’s films have travelled to film festivals across the world, are being used as advocacy tools for social impact, included in the curriculum of universities and exhibited globally, including at the United Nations Climate Change Conference and The Lincoln Center for Performing Arts – becoming catalysts for new conversations. Rintu is a Sundance Skoll Stories of Change Fellow, a South Asia Fellow with the Japan Foundation and a recipient of the President’s Medal (2012), the highest recognition given to filmmakers in India. In 2017, she was chosen as an Adobe Young Lantern, an award that honors creative leaders of tomorrow who are shaping the industry with their artistic vision. Rintu lives between New Delhi and the mountains of Himachal Pradesh. She loves bookshops, dogs and seashores. Writing With Fire is her debut feature documentary.

About the filmmaker – Director / Writer / Producer / Cinematographer Sushmit Ghosh Sushmit Ghosh is a national award-winning director-cinematographer from India whose work has been supported by the Sundance Institute, Chicken & Egg Pictures, Tribeca Institute, Doc Society, SFF Film Fund, IDFA, The Bertha Foundation, Sorfond and the Finnish Film Foundation, among others. Sushmit is also a Sundance Fellow, who enjoys producing films that have the power to create transformative social impact. In 2009, he co-founded Black Ticket Films, a production company invested in the power of non-fiction storytelling. With a strong eye on social justice stories, Black Ticket Films’ award-winning slate of films are being used as advocacy, impact and education tools by institutions across the world. Sushmit has also served on the jury of the National Awards in India and he enjoys teaching cinema as a guest faculty at various universities. Five years in the making, Sushmit’s debut feature documentary, Writing With Fire, premiered at Sundance and went on to win the Special Jury and Audience Awards. In his spare time, you’ll find him motorcycling and hiking through the Himalayas.

“The most inspiring journalism movie — maybe ever. An essential portrait of the fight for press freedom…Writing With Fire reminds us that there are always people who, despite incredible odds, will choose to do this work.” – Jason Rezaian, Washington Post

“As this engaging and hopeful documentary by Rintu Thomas and Sushmit Ghosh shows, words have the power to change things when wielded carefully…‘I believe journalism is the essence of democracy,’ says Meera. Watching this will make you believe it too.” – Amber Wilkinson, Screen International

“Insightful and inspirational…the film’s sense of intimacy and immediacy makes the viewer feel like they’re on a ride-along with the journalists…the filmmakers illuminate the change that can happen when the most marginalized members of a society empower themselves…” – Inkoo Kang, The Hollywood Reporter

“Armed with eagle-eyed filmmakers and compelling subjects, the film deftly blends the (inextricably linked) personal and professional sides of the journalists’ work, offering up a wide-ranging look at a vital outlet with so many stories to tell…the result is profound” – Kate Erbland, IndieWire