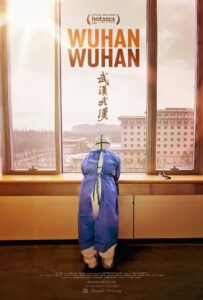 observational documentary unfolding during February and March, 2020 at the height of the pandemic in Wuhan city, where the coronavirus began. With unprecedented access at the peak of the pandemic lockdown, WUHAN WUHAN goes beyond the statistics and salacious headlines and puts a human experience into the early days of the mysterious virus as Chinese citizens and frontline healthcare workers grappled with an invisible, deadly killer. WUHAN WUHAN focuses on five heart-wrenching and endearing stories: a soft-hearted ER doctor and an unflappable ICU nurse from the COVID-19 hospital; a compassionate volunteer psychologist at a temporary hospital; a tenacious mother and

son who are COVID-19 patients navigating the byzantine PRC healthcare system; and a volunteer driver for medical workers and his 9 month pregnant wife whose heartfelt story forms the backbone

of this film. In a time when the world needs greater cross-cultural understanding, WUHAN WUHAN is an invaluable depiction of a metropolis joining together to overcome a crisis. Award-winning filmmaker Yung Chang (Up the Yangtze, This is Not a Movie) joins us for a conversation on the daunting challenges associated with a sprawling story with no end in sight and an unknowable trajectory.

For news and updates go to: wuhanwuhandoc.com

Director’s Statement – As a Chinese person who grew-up in North America, I feel strongly committed to telling a nuanced story that doesn’t generalize a population of people and reveals them to be individuals, not just a monolith. Nationalism builds walls and this is not the intention of this film. In WUHAN WUHAN, the lives of the people we follow are individually a document of perseverance, but collectively they represent the profound humanity we universally hope for in times of crisis. I’m driven to make this film because of anti-Asian racism quelled by double-speak and mis-truths from leaders around the world, who obfuscate the realities of this pandemic; that in the end it is the everyday person, the essential frontline workers, the volunteers, the intergenerational families, it is us, who must navigate the ups-and-downs of this unprecedented and historic event that will shape our lives forever. In a way, as systems and governments fail us, the people have come together. We will survive. – Yung Chang

About the filmmaker – Ying Chang is the director of Up the Yangtze (2007), China Heavyweight (2012), and The Fruit Hunters (2012). He is currently completing a screenplay for his first dramatic feature, Eggplant, which was selected in 2015 to participate in the prestigious Sundance Labs. Chang’s films have premiered at international film festivals including Sundance, Berlin, Toronto, and IDFA and have played theatrically in cinemas around the world. Up the Yangtze was one of the top-grossing documentary releases in 2008. In 2013, China Heavyweight became the most widely screened social-issue documentary in Chinese history with an official release in 200 Mainland Chinese cinemas. His films have been critically-acclaimed, receiving awards in Paris, Milan, Vancouver, San Francisco, the Canadian Genie, Taiwan Golden Horse, Cinema Eye Honors, among others and have been nominated at Sundance, the Independent Spirit Awards and the Emmys. Chang’s films have been shown on international broadcasters including PBS, National Geographic, ARTE, ZDF, Channel 4, HBO, TMN, NHK, CBC, TV2, SBS and EBS. Chang is the recipient of the Don Haig Award, the Yolande and Pierre Perrault Award, and the Guggenheim Emerging Artist Award. He is a member of the Directors Guild of Canada. In 2013, he was invited to become a member of the Academy of Motion Picture Arts and Sciences.