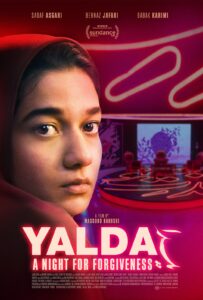 is a 22-year-old woman, who has been sentenced to death for murdering her 65-year-old husband, Nasser. Iranian law allows for the victim’s family to forgive her and spare her life, so Maryam’s fate will be decided by Nasser’s daughter, Mona, 37, on the country’s most popular televised reality show. In front of millions of viewers during Yalda, the winter solstice celebration, Maryam and Mona discover that forgiveness can be difficult as they relive the past. Director and screenwriter Massoud Bakhshi brings aesthetic energy and dramatic intensity to a story that unfolds over a few hours and almost entirely within the studio.

Compelled by the social complexities of contemporary Iran, Bakhshi started as a documentary filmmaker, during which time he met several women who had murdered their husbands. Their stories stayed with him as he developed this powerful exploration of women characters. Although Maryam and Mona are condemned in some way and subject to Iran’s profound patriarchy, they find agency, moral authority, and freedom within those confines.  Winner of the 2020 Sundance Film Festival Grand Jury Prize: Dramatic Yalda, a Night for Forgiveness elucidates Iran’s vibrant, modern identity alongside its deeply traditional culture.

For news and updates go to: pyramidefilms.com/yalda-a-night-for-forgiveness

About the filmmaker – Born in Tehran, Iran, in 1972, Massoud Bakhshi has worked as film critic, scriptwriter and producer, before making 12 documentaries and short films which were awarded internationally. His first feature film A Respectable Family was selected at Cannes Film Festival 2012 (Quinzaine des réalisateurs). Yalda, a night for forgiveness is his second feature film, selected at the World Cinema Dramatic Competition Sundance Film Festival 2020 and at the 70th Berlin International Film Festival Generation 14+ Competition 2020.