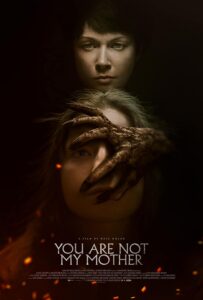 Halloween and Char’s mother, Angela (Carolyn Branken), has inexplicably disappeared. All that remains is her abandoned car. When she returns home without explanation the following evening, it

becomes clear to Char (Hazel Doupe) and her grandmother, Rita (Ingrid Craigie), that something is amiss. She might look and sound the same but Angela’s behavior   has become increasingly frightening, as if she has been replaced by a malevolent force. When Halloween arrives, a night steeped in ancient myth and legend, Char realizes that she is the only one who can save her, even if it means potentially losing her forever. Director and screenwriter Kate Dolan (Catcalls)

joins us for a conversation on updating the folkloric tale of the changeling and the connection to a more modern and scientific context of mental health, as well as the razor sharp examination of the mother / daughter relationship, while scaring the pants of viewers.

For updates and screenings go to: youarenotmymother.com

About the filmmaker – Director, writer and editor Kate Dolan graduated with an Honours Degree in Film & Television Production from the National Film School, IADT in 2012where she majored in Directing and minored in Editing. Her graduate short Breathe In was selected for a number of Irish and international film festivals. In 2014, she directed a short called Little Doll at the Short Film Script Station. The film depicts the first same-sex crush of a young girl. her second film, Little Doll was included in the British Council’s  fiveFilms4freedom 2016 Global List – 33 inspiring people from around the world promoting freedom, equality and LGBT rights every day.In 2017, she directed Catcalls, an irreverent Horror about a sexual predator who gets whats coming to him. The film won Best Short Film at the YDA Ireland in 2018 and has played at many festivals all over the world including BFI London Film Festival, Fantastic Fest, and Fantasia Film Festival. In 2019 I was selected by Screen Ireland to take part in their inaugural POV scheme with a script Dolan wrote and will direct entitled You Are Not My Mother. The film had it’s premiere as part of the Midnight Madness strand at TIFF in September 2021. The came runner up in the Midnight Madness People’s Choice Awards. You Are Not My Mother also won the Jury Prize at the Festival de Gérardmer 2022.  Dolan was nominated for the Discovery Award at the Virgin Media Dublin International Film Festival 2022 taking place in March.  For more go to: katedolan.ie

“The film takes a strong script and turns it into something that must be watched more than once to be fully appreciated and showcases strong performances, especially from Hazel Doupe and Carolyn Bracken.” – Emilie Black, Cinema Crazed

“Kate Dolans feature debut is a masterclass in tension from its bold opening to its bittersweet conclusion.” –

“More concerned with creating a slowburn of discomfort than with deploying jumpscares, it is driven by first-rate performances from Bracken and, in particular, rising star Doupe.” – Wendy Ide, Screen International

“What makes You Are Not My Mother such compelling viewing is how it seeks to defamiliarize our moral and ideological expectations surrounding women and the broader concept of strength, challenging us to think in more complex ways about gender and power.” – Alexandra Heller-Nicholas, AWFJ Women on Film