In YOU DON’T NOMI, a chorus of film critics and fervent devotees explore the 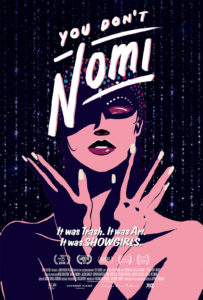 complicated afterlife of 1995’s biggest film flop, Paul Verhoeven’s salacious SHOWGIRLS from disastrous release to cult adoration and extraordinary redemption 25 years later. Showgirls was met by critics and audiences with near universal derision. YOU DON’T NOMI traces the film’s redemptive journey from notorious flop to cult classic, and maybe even masterpiece.The film features Adam Nayman (Vice Guide to Film), April Kidwell (I, Nomi) and Peaches Christ (Milk) as well as archive interview footage with the cast and crew of Showgirls. While SHOWGIRLS

is the main subject of YOU DON’T NOMI, the documentary is also a retrospective of Verhoeven’s directing career from RoboCop, Total Recall, Basic Instinct, Starship Troopers and Elle, among others. It explores the themes that unite his films, while showcasing Verhoeven as a genius and as a controversial figure all at the same time. Director Jeffrey McHale joins us to talk about his own Showgirls odyssey and how he came to document the subculture that celebrates a film that cinephiles often vilify and embrace at the same time.

About the filmmaker Jeffrey McHale, Director / Producer / Editor, is a documentary filmmaker based in Los Angeles. His feature film debut, YOU DON’T NOMI, is the zenith of what he calls his “Showgirls adventure.” While McHale’s inspiration for You Don’t Nomi originated with the unexpected viral success of his 2010 trailer mashup of Paul Verhoeven’s  Showgirls and Darren Aronofsky’s Black Swan, Nomi also synthesizes recurring themes in McHale’s work, including the examination of queer subcultures and the exploration of how identities are articulated. As a television editor, McHale’s work includes acclaimed technology and science news series TechKnow for Al Jazeera English and most recently the groundbreaking World Cup docuseries Phenoms for Fox. Earlier projects, including documentary shorts and music videos, have screened at NewFest, Frameline, Austin Gay & Lesbian International Film Festival, and the Melbourne Queer Film Festival. A native of Michigan, McHale began his career at WGN America after studying film at Columbia College Chicago.

“You Don’t Nomi makes a compelling case that the much-maligned pop-culture landmark can be judged as either tawdry rubbish or subversive comic triumph.” – David Rooney, Hollywood Reporter

“This is the most thoughtful deconstruction of a film imaginable, as well as an ideal festival choice for those who used to buy DVDs just for the commentaries.” – Kent Turner, Film-Forward.com

“While far from a straightforward documentary about a widely marginalized film, You Don’t Nomi reminds us that it’s okay to like things with rough edges, that streamlined perfection is overrated…” – Chuck Foster, Film Threat

“Nomi leaves it up to audiences to decide if Showgirls is trash, a masterpiece, or a “masterpiece of trash,” but one thing is certain: no matter how good or how bad one considers the film’s objective quality, one can enjoy Showgirls all the same.” – Pat Mullen, POV Magazine