Conveying Basquiat’s personal magnetism, eccentricity and non-stop creativity without romanticizing him, BOOM FOR REAL: THE LATE TEENAGE YEARS OF JEAN- 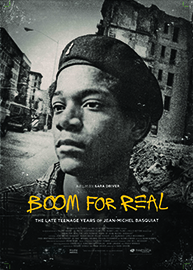 MICHEL BASQUIAT serves as another chapter in the ongoing effort to rescue the artist from his own hype. To tell this story, Driver, who was part of the New York arts scene herself, worked closely and collaboratively with friends and other artists who emerged from that period. Drawing upon their memories and anecdotes, the film also uses period film footage, music and images  to visually evoke the era, drawing a portrait of Jean-Michel and Downtown New York City-pre AIDS, President Reagan, the real estate and art booms – before anyone was motivated by money and ambition. BOOM FOR REAL: THE LATE TEENAGE 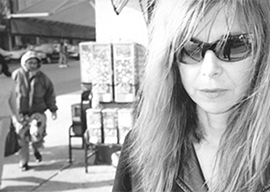 YEARS OF JEAN-MICHEL BASQUIAT follows Basquiat’s life pre-fame and how New York City, the times, the people and the movements surrounding him formed the artist he became. Using never-before-seen works, writings and photographs, director Sara Driver worked closely and collaboratively with friends and other artists who emerged from that period: Jim Jarmusch, James Nares, Fab Five Freddy, Glenn O’Brien, Kenny Scharf, Lee Quinones, Patricia Field, Luc Sante and many others. Sara Driver made her directorial debut with the short film YOU ARE NOT I in 1981, which she adapted from the 1948 Paul Bowles short story of the same name. The film, named as one of the best movies of the 1980s in a Cahiers du Cinéma critics’ poll, was lost for many years until its rediscovery in 2008 among Bowles’ belongings in Tangier. Director Sara Driver joins us for engaging conversation with one of the late-twentieth century’s brightest and innovative artist.

For news and updates go to: boomforrealfilm.com

“A treasure. A transporting doc about the early career of Basquiat and the environment where he flourished. Conveys his personal magnetism, eccentricity and non-stop creativity without romanticizing him.” – John DeFore, The Hollywood Reporter

“Vivid and beautifully meditative. It shows how one of the most emblematic American artists of the late 20th century found his voice in the rubble.” – Chris Barsanti, AV Club

“Driver does a great job of showing how Basquiat’s graffiti smears were more than just a subjective piece of art but also spoke candidly to social commentary on race, poverty, and oppression.” – Jamie Broadnax, Black Girl Nerds