In a hospital room, the Daughter recalls a childhood moment when as a 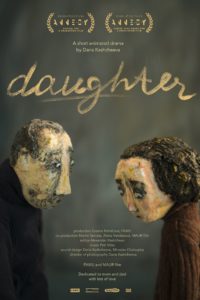 little girl she tried to share her experience with an injured bird with her Father. A moment of misunderstanding and a lost embrace has stretched into many years all the way to this hospital room, until the moment when a window pane breaks under the impact of a little bird.

Director’s Biography:  studies animated film at FaMU in Prague. her student films featured at many