GENERAL MAGIC takes us back to the early 1990’s, as a team of former Apple employees form their own company and prepare to take Silicon Valley by storm. 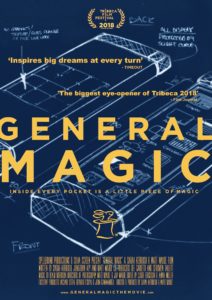 From the first smartphones to touchscreens, e-commerce, eBay to emoticons, the ideas that now dominate the tech industry and our day-to-day lives were born at General Magic, a 1989 Silicon Valley startup that you’ve never heard of. The company and the product were so ahead of their time, that it ultimately failed, and the company closed down. However, General Magic’s former employees have since gone on to found eBay, Linkedin, and Android, to developing the technology that has led to the iPhone, iPad, iPod and everything that we all use today in our daily lives. These “magicians” have become the tech innovators that now lead companies like Samsung, Apple and Facebook. GENERAL

MAGIC, the film tells the story of how great vision, grave betrayal and an epic failure changed the world forever.  What was once thought of as an embarrassment is now embraced as amazing.  This incredibly insightful and entertaining film looks at the rise and fall of the

most influential Silicon Valley company you have never heard of called GENERAL MAGIC. The film captures the spirit of those of us who dare to dream big and the life-changing consequences when we fail, fail again, and fail better. GENERAL MAGIC Co-director Matt Maude (Sarah Kerruish) and film subject Marc Porat talk abouthow this remarkable team of creatively brilliant engineers, artists and visionaries that failed and succeeded at creating a technologies that continue to have an impact on the world around us.

For news and updates go to: generalmagicthemovie.com

“A fascinating tale.” – The Hollywood Reporter
“The biggest eye-opener of Tribeca 2018,” – Film Journal
“Poignant, entertaining and full of life and lessons.”- Forbes
“Gripping material, deftly edited, “General Magic” is remarkable’’ – Barrons
“General Magic is a reminder of how compelling stories about technology can be.” – The Verge
“The footage is unbelievable. This geekily comic doc inspires big dreams at every turn.” – TimeOut