Jon Kean’s After Auschwitz, is a “Post-Holocaust” documentary that follows six extraordinary women after their liberation from Nazi concentration camps, 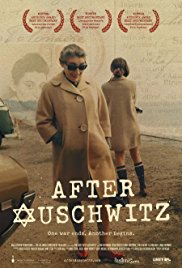 capturing what it means to move from tragedy and trauma towards life. Following its North American premiere in Toronto on April 14, the film will have its U.S. theatrical premiere in New York City April 20 and then roll out to select theaters across the country, including Los Angeles and Miami. After Auschwitz, examines the question, “What happens after surviving an unspeakable horror?” with six stories of remarkable women who survived the Holocaust and went on to build lives in the United States, but never truly found a place to call home. For survivors of the Holocaust, liberation was both an incredible moment and a devastating one. It marked the beginning of a life-long struggle. Most wanted to go home, but there was no home left in devastated post-war

Europe. Many came to America and wanted to tell people about their experiences, but were silenced. “You’re in America now, put it behind you” is what they were told. The women Kean follows became mothers and wives with successful careers, but never fully healed from the scars of the past. Their stories show the indelible role immigrants and women played in the history of America during the second half of the 20th century, and they serve as our guides on an unbelievable journey – sometimes celebratory, sometimes heart-breaking, but always inspiring. After Auschwitz director, Producer and writer Jon Kean (Kill The Man; Swimming in Auschwitz) stops by for a conversation on the unspeakable horror of the Holocaust and the fierce determination of six remarkable women who refused to allow the genocidal massacre to ruin them.

For news and updates go to: afterauschwitz.com

“For the death camp survivors we meet in the brisk, engaging, and sneakily profound After Auschwitz, the day of liberation was the best and worst day of their lives.” – Gary Thompson, Philadelphia Daily News

“Jon Kean, the director, chose the material wisely and doesn’t shy from severe images. He and his team also have good ears for anecdotes.” – Ken Jaworowski, New York Times