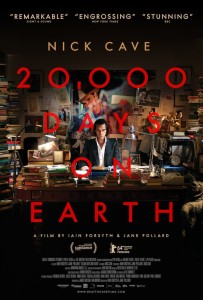 Drama and reality combine in a fictitious 24 hours in the life of musician and international cultural icon Nick Cave. The film is an intimate portrait of the artistic process, celebrating the transformative power of the creative spirit. 20,000 Days On Earth takes us deep into the heart of how myth, memory, love and loss, shape our lives, every single day. A line in Cave’s songwriting notebook calculating how many days he’d been alive inspired the film’s title. The film delves into Nick’s artistic processes, unpicking the stuff that makes him tick. Fusing drama and documentary to weave a cinematic day-in-the-life with unique verité observations of his full creative cycle. 20,000 Days on Earth premiered at the 2014 Sundance Film Festival, where it won the World Cinema Documentary awards for for directing and editing. Co-directors Iain Forsyth and Jane Pollard talk to us about their category defying film that pushes the medium into new territory, exploring universal themes about artistry, and celebrating the transformative power of the creative spirit.

Screenings of 20,000 Days on Earth go to: drafthousefilms.com/film

“Just spending an hour and a half or so inside the mind of Nick Cave would be fascinating enough. But the themes of time and lifetime, and the 20,000-day take on it, make this one a must-see.” – Michael Dunaway, Paste Magazine