It’s the Summer of ’87, and Gio (Spencer Boldman), an Italian kid from Queens, 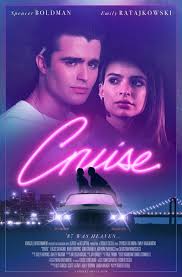 has little on his mind but cars and girls. Gio thinks he’s got it all figured out until he meets Jessica (Emily Ratajkowski), a nice Jewish girl from Long Island who likes to go undercover for illicit thrills on the wrong side of the tracks. An affectionate look at the youth culture of a bygone era, CRUISE celebrates the joys of muscle cars, Motorola

pagers and endless summer nights.CRUISE also stars Sebastian Maniscalco, Lucas Salvagno, Kathrine Narducci, Noah Robbins, and Gino Cafarelli. Director and writer Robert Siegel (Big Fan, The Wrestler and The Founder) joins us to talk about his coming-of-age story, his own attraction to outsider culture and the scarcity of red-blooded American actors.