TINY TIM: KING FOR A DAY is a biographical documentary about a 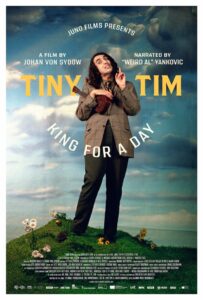 musician who is not only well known for hits such as TipToe Through The Tulips but for his trailblazing personae that paved the way for other rock stars such as David Bowie, Prince, Iggy Pop and Boy George. An outcast from a young age, Herbert Boudrous Khaury’s rise to stardom as Tiny Tim is the ultimate fairytale. Considered a freak by many of his peers, Tiny Tim left no one unaffected. His wedding to Miss Vicki on the Tonight Show with Johnny Carson was watched by over 45 million Americans, and his queer personality has been celebrated by the likes of Bob Dylan and Lady Gaga. There were plans and hopes that Tiny Tim would be a lasting star, not only a novelty act but one man ruined these plans: Tiny Tim. The memorable archival footage,

exclusive access to Tiny Tim’s intense diaries, the playful and powerful animations and the interviews with his family and friends makes this film not only a captivating portrait, but also a psychological drama, examining the borderline between insanity and geniality.

TINY TIM: KING FOR A DAY is narrated by Weird Al Yankovic – reading from Tiny Tim revealing diary entries – and includes archival footage from D.A. Pennebaker, Jonas Mekas, Andy Warhol and others. Director and Producer Johan von Sydow (Mare Kandre: I Am the Genius!, The Jussi Bjoerling Saga) joins us to talk about the rise and fall of an artist who was one of the most vulnerable, fearless and determined performers to ever stand in front of an audience. TINY TIM: KING FOR A DAY is a unique portrait of one of the oddest stars the world has ever seen.

For news, screenings and updates go to: tinytimfilm.com

Tiny Tim: King for Day will be in select theaters April 23

About the filmmaker – Johan von Sydow is a drector and staff producer at SVT:s well renowned arts and culture show Kobra. His first two documentaries (Mare Kandre and The Jussi Bjoerling Saga) were called “the two best Swedish cultural docs in the 2000s” by a leading tv-critic, and his latest (Ratata through the ´80s) was, according to another critic, “a benchmark for future Swedish popmusic documentaries”. The Jussi Bjoerling Saga was nominated as Best documentary in the Swedish TV-award Kristallen.

“There was never anything like Tiny Tim – not before or since – and, as the film makes clear, his character was anything but an act.” – Joel Selvin, San Francisco Chronicle

“Reveals a performer who was haunted by shame, sexual suppression, religious torment and memories of his brief time at the top.” – Richard Crouse

“Overall, it’s a great place to start if you want to learn more about the American legend who was Tiny Tim.” – Lorry Kikta, Film Threat