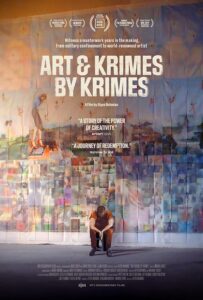 imprisonment often work against the greater social good. The engaging documentary on an artist, Jesse Krimes,

locked up for six years in federal prison. He spends a good deal of his time secretly creating a monumental works of art—including an astonishing 30-foot mural made with prison bed sheets, hair gel, and newspaper. Krimes smuggles out each panel piece-by-piece with the help of fellow artists, only seeing the mural in totality upon coming home. As Jesse’s

work captures the art world’s attention, he struggles to adjust to life outside, living with the threat that any misstep will trigger a life sentence. In addition to a focus on the stunning work of Jesse Krimes, ART & KRIMES BY KRIMES also features the work of formerly incarcerated artists Russell Craig, Jared Owens and Gilberto Rivera. Director, Writer, Producer and award-winning filmmaker Alysa Nahmias joins us for a conversation on confinement, loss, creativity and how her vérité filmmaking captured the jagged life of Jesse Krimes, from broken childhood through to his triumphant gallery show.

For updates and screenings go to: krimesfilm.com

About the filmmaker – Director, Writer, Producer Alysa Nahmias is an award-winning filmmaker and founder of AJNA. She directed and produced the feature documentaries Art & Krimes by Krimes (2021) featuring artist Jesse Krimes and distributed by MTV Documentary Films, The New Bauhaus (2019) about visionary artist László Moholy-Nagy, and Unfinished Spaces (2011, co-directed with Benjamin Murray) about the Cuban National Art Schools, which won a 2012 Independent Spirit Award, was distributed by PBS and Netflix, and is in the permanent collection at the Museum of Modern Art (MoMA), New York.  As a producer, her work includes the forthcoming Untitled Wildcat Documentary directed by Melissa Lesh and Trevor Frost for Amazon Studios and the Emmy-nominated and Oscar-shortlisted Unrest directed by Jennifer Brea, which won an a Special Jury Award at the 2017 Sundance Film Festival and was distributed by Netflix and PBS Independent Lens. Her producing credits also include the scripted feature No Light and No Land Anywhere, directed by Amber Sealey with executive producer Miranda July (Jury Award winner, LA Film Festival 2016), and the documentaries A Decent Home, directed by Sara Terry (DOC NYC, Denver 2021); What We Left Unfinished, directed by Mariam Ghani (Berlinale, SFFILM 2019) distributed by Dekanalog and Criterion; I Didn’t See You There, directed by Reid Davenport (Sundance 2022); Weed and Wine (Hot Docs 2020), directed by Rebecca Richman Cohen; and American Masters’ Afternoon of a Faun: Tanaquil Le Clercq directed by Nancy Buirski with creative advisor Martin Scorsese (NY Film Festival, Berlinale 2013).  Alysa has been featured in Filmmaker Magazine as an independent film innovator. She is a 2020 Film Independent Fellow and a 2019 Sundance Institute Momentum Fellow. She was the co-author of a Sundance Creative Distribution Case Study on Unrest. She holds degrees from New York University and Princeton University. Alysa is a founding member of FWD-Doc as an ally who is committed to advocating for disability rights and inclusion, and she is a member of the Documentary Producers Alliance (DPA) and the Academy of Motion Picture Arts and Sciences.

“Offers an eye-opening look at how one artist is seeking to lift the veil on a part of American society that has been made largely invisible to the public.” – Artnews
“A journey of redemption and artistic self-discovery” – Hammer to Nail