With the Supreme Court decision to overturn constitutional protections for 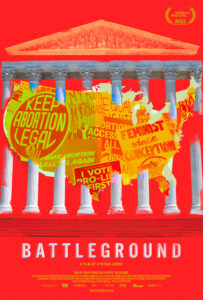 abortion the clarion call to action can be seen on Cynthia Lowen’s incisive new documentary film, BATTLEGROUND. Among the many substantive questions posed is, how have we arrived at the end of Roe, when 7 in 10 Americans support access to abortion and 1 in 4 women will terminate a pregnancy? BATTLEGROUND follows three women who lead formidable anti-abortion organizations in their single-minded quest to overturn Roe v. Wade, as they face down forces equally determined to safeguard women’s access to safe and legal abortions. Who are anti-abortion people? What are they driven by, what do they believe, how they operate and what are their goals? BATTLEGROUND gets inside the anti-abortion movement as never seen before to answer these questions, with

many surprises: they are women, young people, even Democrats. With close access, the film shows how the anti-choice movement is strategizing and organizing, and their determination to overturn Roe at any cost. As their power and influence propels the Supreme Court sharply right, and states race to enact unconstitutional abortion bans, the film also depicts those on the front lines of the fierce fight to maintain access. Now that Roe has been  overturned, at least 26 states will ban abortion, 13 of which have trigger laws that have now gone into effect. Two hundred clinics now face closure and 36 million people of reproductive age will lose access to abortion. BATTLEGROUND is required viewing for anyone with a stake in the future of abortion in America. Director Cynthia Lowen joins us to talk about all of these life-changing developments and what can be done moving forward.

For updates and screenings go to: battlegroundfilm.org

About the filmmaker – Cynthia Lowen is an Emmy-nominated filmmaker and award-winning writer whose work uses the power of story to catalyze meaningful change. Cynthia is the director and producer of ‘Netizens’ (HBO), a feature documentary about women and online harassment. Cynthia also spearheaded the ‘Netizens’ Impact Campaign, working with tech companies and advocacy partners including the Anti-Defamation League, the Cyber Civil Rights Initiative, Facebook, Microsoft, the National Network to End Domestic Violence and others to develop tools to reduce online harassment and foster constructive digital citizenship. Cynthia is also the producer and writer of ‘Bully’ a feature documentary following five kids and families through a ‘year in the life’ of America’s bullying crisis. ‘Bully’ was nominated for two Emmys, shortlisted for the Oscars, screened at The White House and received a DuPont-Columbia Award for Excellence in Journalism. Cynthia has held residencies at MacDowell, the Banff Center, Yaddo, Hedgebook, the Berlinale Talent Campus, the Fine Arts Work Center in Provincetown among others, and received the Hedgebrook Women Authoring Change Fellowship from William Morris Entertainment. She has been a member of the Producers Guild of America since 2014.

“In its quiet, uninflected way, Battleground delivers valuable insights, leaving it to viewers to assess and take some action or not.” – Caryn James, Hollywood Reporter

“Messy, personal, timely, brimming with ideas, overflowing with pain, and without answers: that’s the debate, and that’s the doc.” – Kate Erbland, indieWire

“Battleground is the vital documentary we need now, giving breadth of space for both sides of the aisle to be heard, but also shining a light on the ultimate chess board that is the fight against abortion.” – Stephanie Archer, Film Inquiry