On January 12, 2010, a 7.0 earthquake devastated Haiti and changed the course 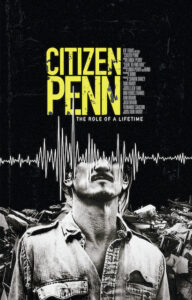 of millions of lives. International aid and aid workers descended on Haiti to help in any way they could. One of those people driven to help was American actor and filmmaker Sean Penn. CITIZEN PENN chronicles the moment Sean Penn and his team of volunteers landed in Haiti just days after the earthquake struck and the ten years since. For Penn, Haiti changed his life. He went there for what he thought was a two-week aid mission to drop off supplies, help doctors provide immediate medical care, and then get out … get back to his

normal life. Instead, he stayed and created an organization called J/P HRO (now CORE) that took over management duties for the largest camp for displaced people in the entire country. This feature-length documentary delivers unparalleled access to one

of America’s most polarizing figures. CITIZEN PENN offers viewers an intimate, honest, and self reflective look into the triumphs and challenges of a man who decided to do something. He got involved in a way few celebrity activists ever will. Director Don hardy joins us to talk about his first impressions of the devastation in Port-Au-Prince, the complicated relationship Haiti has with America and France and the sustained tenacity of Sean Penn to do the right thing.

Premiering on discovery+ on May 6th

For more on Don Hardy go to: ktffilms.com/citizen-penn

About the filmmaker – Don Hardy is an award-winning documentary filmmaker who recently completed the first season of a new documentary series for Disney+ called Pick of the Litter, based on the documentary film of the same name that he produced and directed in 2018. He is also in production on a short-form documentary series about the homelessness epidemic in California titled The Way Home. In 2018 and 2019 Don was selected to participate in the American Film Showcase, traveling as a US Envoy with the State Department as a part of this prestigious film diplomacy program. Don’s previous film, Theory of Obscurity, about the legendary music and art collective known as The Residents, premiered at SXSW in 2015 and was released theatrically by Film Movement in April of 2016. Don’s film, The Human Experiment, was released in theaters by Area 23a and on VOD by FilmBuff in the spring of 2015. Narrated and executive produced by Oscar® winner Sean Penn, the film lifts the veil on the shocking reality that thousands of untested chemicals are in our everyday products, our homes and inside of us. Don also served as Director of Photography on Batkid Begins, which premiered at Slamdance in early 2015. Batkid Begins was released by Warner Brothers/New Line Cinema in June 2015. In 2011, Don’s film, Love Hate Love, premiered at the Tribeca Film Festival. The film won several film festival awards and had its US broadcast premiere on the Oprah Winfrey Network in 2012. His first film, Witch Hunt, premiered at the Toronto International Film Festival in 2008 and was broadcast on MSNBC. Over the years, Don has also been awarded 6 regional Emmys, 3 Edward R. Murrow Awards, 7 Associated Press Awards, the prestigious San Francisco Bay Area Photographer of the Year Award, and more than 15 National Press Photographer Association Awards.For more about Don Hardy go to: ktffilms.com

“If you go into it thinking that you’re going to be rolling your eyes at the ultimate self-deluded celebrity do-gooder, the movie may stop you in your tracks.” – Owen Gleiberman, Variety

“The common complaint about celebrities delivering “woke” lectures from the comfort of their pampered lives receives a well-calculated brush-back pitch with Citizen Penn.” – Brian Lowry, CNN.com

“Perhaps some enraged hater or three will stumble across it and maybe soften their views on Penn’s very serious, very public charity work, something most of the media and much of the country has already done.” – Roger Moore, Movie Nation