As imaginative as the creative process it documents, A DOG CALLED MONEY is a 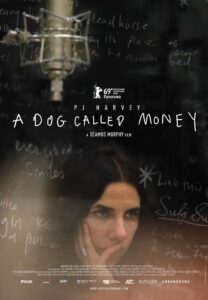 uniquely intimate journey through the inspiration, writing and recording of a PJ Harvey record. Writer and musician Harvey and award-winning photographer Seamus Murphy, hatched a collaboration. Seeking first-hand experience of the countries she wanted to write about, Harvey accompanied Murphy on some of his worldwide reporting trips, joining him in Afghanistan, Kosovo, and Washington DC. Harvey collected words, Murphy collected images. Back home, the words become poems, songs, then an album,

which is recorded in an unprecedented art experiment in Somerset House, London. In a specially constructed room behind one-way glass, the public – all cameras surrendered – are invited to 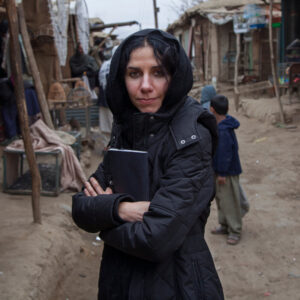 watch the 5 week process as a live sound-sculpture. Murphy exclusively documents the experiment with the same forensic vision and private access as their travels. Director / photographer Seamus Murphy brilliantly captures encounters with the people and places he and Polly Jean visit, showcasing the humanity at the heart of his work, while also tracing the evolution of their shared experience into her recorded music and ultimately into their impassioned collaboration.

For news and updates go to: abramorama.com/pjharvey-adogcalledmoney

About the filmmaker – Seamus Murphy grew up in Ireland and is based in London. He is the recipient of seven World Press Photo awards for his photographic work in Afghanistan, Gaza, Lebanon, Sierra Leone, Peru and Ireland. He received The World Understanding Award from POYi in the USA for his work from Afghanistan and a film he made based around this work was nominated for an Emmy and won the Liberty in Media Prize in 2011. His work has been published and exhibited widely. He has made films for The New Yorker and Channel 4 Television in the UK.  He is the author of four books including A Darkness Visible: Afghanistan (Saqi Books. 2008) is based on 12 trips to the country between 1994 and 2007 and is a chronicle of Afghanistan’s extraordinary recent history. I Am The Beggar of the World (Farrar Straus Giroux. 2014) offers a rare glimpse into the lives of Afghan women through their anonymous Landay poetry. He has collaborated with musician PJ Harvey on projects for Let England Shake and The Hope Six Demolition Project, for which he won a Q Award for Best Music Film in October 2016. Patti Smith listed Murphy’s film for Harvey’s The Words that Maketh Murder as one of her Top 10 artworks, saying “… this unheralded piece (directed by Seamus Murphy) is a wisp of humanity celebrating the small things. “Murphy and Harvey together published The Hollow of the Hand (Bloomsbury. 2015) a book of his photography and her poetry. An exhibition and live presentation of The Hollow of the Hand work took place at the Royal Festival Hall, London in 2015 and at Les Recontres d’Arles in France in 2016. His latest book The Republic (Allen Lane. 2016) is an immediate and personal portrait of Ireland and was exhibited at The Little Museum in Dublin in 2017.

“It’s fascinating to see the creative process laid bare in such a way, and the film confirms Harvey’s position as a vital and relevant artist who thrives through collaboration and experimentation.” – Jamie Healy, Radio Times

“Murphy has an unerring eye for poetic compositions that emphasise faces, isolated soldiers and civilians in battle zones, and anomalous juxtapositions of vulnerable non-combatants and military personnel.” – Graham Fuller, Sight and Sound

“As a peek inside the artistic process, Murphy’s film succeeds: it’s the type of demystification that only serves to make the endeavour more remarkable.” – Hilary A White, Sunday Independent (Ireland)