The inspiring, gritty documentary, A TINY RIPPLE OF HOPE, focuses on Jahmal 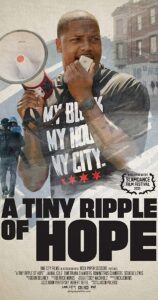 Cole with his My Block, My Hood, My City: an organization bringing hope and opportunity to teenagers across Chicago’s segregated South and West Sides. Cole is charismatic and charming, and the beating heart of his community –because he does care so very much (his home mortgage is used to fund his organization!). This aspirational feature film documentary A TINY RIPPLE OF HOPE from award winning filmmaker Jason Polevoi will make its world premiere at this

year’s Slamdance Film Festival (February 12th – 25th, 2021) as a Competition Documentary and the film follows a formative year for Jahmal as he struggles with everything he must sacrifice so that the people and the city he loves can prosper. Director Jason Polevoi joins us to talk about the complex and

occasionally chaotic life and work of Jahmal Cole as well as documenting the systemic barriers that far too many people living in Chicago’s poorest zip codes are forced to navigate and the joy of watching so many, including Jahmal, forge their way towards a better future.

For news and updates go to: onecityfilms.com

To watch A Tiny Ripple of Hope go to: slamdance.com

About the filmmaker – Jason Polevoi is a founding partner of the Chicago-based production company One City Films and the first-time feature Director and Producer of the Slamdance Film Festival premiering documentary A Tiny Ripple of Hope. Jason’s previous credits include the Chicago/Midwest Emmy-winning documentary F*** Your Hair, the Independent Lens series The Calling, and A Regional Taste, a first-of-its-kind docuseries for the James Beard Foundation.

About the subject – Jahmal Cole – A champion of social justice, Jahmal Cole’s mission is to build a more interconnected Chicago on the pillars of service and education. As the founder and CEO of the city’s fastest-growing social impact organization, My Block • My Hood • My City, Jahmal is the creator of an exposure-based education program for teens and a network of volunteer initiatives that serve Chicago communities year-round. In 2018, Jahmal was named a Chicagoan of the Year by Chicago Magazine, in 2019, he was named to Crain’s 40 under 40, and in 2020 he was awarded the American Red Cross Community Impact Hero Award.