THE WIND tells the tale of an unseen evil haunts the homestead in this chilling, 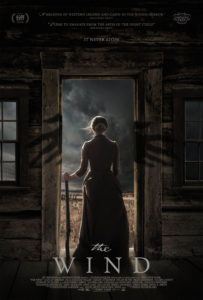 folkloric tale of madness, paranoia, and otherworldly terror. Lizzy (Caitlin Gerard) is a tough, resourceful frontierswoman settling a remote stretch of land on the 19th-century American frontier. Isolated from civilization in a desolate wilderness where the wind never stops howling, she begins to sense a sinister presence that seems to be borne of the land itself, an overwhelming dread that her husband (Ashley Zukerman) dismisses as superstition. When a newlywed couple arrives on a nearby homestead, their presence

amplifies Lizzy’s fears, setting into motion a shocking chain of events. THW WIND masterfully blends haunting visuals with pulse-pounding sound design, while director Emma Tammi evokes a godforsaken world in which the forces of nature come alive with quivering menace. Director Emma Tammi stops by for a conversation on “Penny Sermons” and the challenges of isolated, desert shoots and framing a non-traditional western from a woman’s perspective.

For news and updates go to: ifcfilms.com/the-wind

“This pioneer chiller shines a gender-specific spotlight on the ways isolation and hardship can ravage a woman’s mind.” – Jeannette Catsoulis, New York Times

“”The Wind” doesn’t seek to make infallible heroes of its women, but to understand and empathize with even their most unforgivable acts. And it’s a hugely promising debut in terms of Tammi’s steady, assured directorial craft.” – Jessica Tiang, Variety

“The Wind is a confident, thoughtful, yet creeping and powerful film, with well-earned jump scares and demons both real and possibly imaginary, enough to make you afraid of the dark and the emptiness of even the most beautiful places.” – Shelagh Rowan-Legg, ScreenAnarchy

“The Wind is a western, but it’s not about a man. It’s also a folkloric, supernatural horror but it’s not exactly about monsters, either. The Wind is a film about a woman, and the domestic space she tends and defends.” – Tara Judah, Desist Film