Barefoot: The Mark Baumer Story is the latest documentary from award-winning 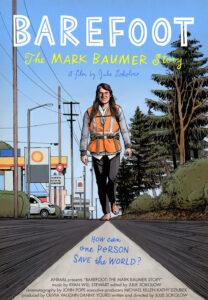 filmmaker Julie Sokolow is a loving portrait of Mark Baumer, an environmental activist, avant-garde writer, and vegan, who hiked barefoot for over 100 days across America to draw attention to climate change. In a voice The New Yorker praised as “reminiscent of Andy

Kaufman”, Baumer narrates his offbeat take on life and how we all can make a difference. Skillfully edited from Baumer’s own self-recorded videos, along with interviews from family and friends, is filled with laughs, tragedy, and inspiration. Barefoot: The Mark Baumer Story is about a man who loved life, loved the world, and it showed in

everything he did. Director Julie Sokolow (Women of Fire) and Mark’s parents, Jim and Mary Baumer joins us for a conversation on Mark’s warm-hearted, exuberant approach to life, his commitment to the vision of the life he wanted to champion and their loving support for their only child.

For news, updates and screenings go to: barefootdocumentary.com

About the filmmaker – Julie Sokolow is the award-winning director of Woman on Fire, which aired on Starz in 2017. The film is about Brooke Guinan, the first openly transgender firefighter in New York. She also directed Aspie Seeks Love, which won Best Documentary at the 2015 Cinequest Film Festival. Her short film Street Doctor went viral in 2014 and received over one million views. She is the creator of the Healthy Artists web series (2012-2014), about the challenges of artists without health care access. Her films have been featured by The New York Times, Vimeo Staff Picks, IndieWire, VICE, Salon, Village Voice and Huffington Post. Barefoot: The Mark Baumer Story is her third documentary feature.

“Barefoot “manages to get at deeper systemic questions that we often don’t face. Who is this world for? Why is it weird to walk from place to place? Why is it completely dangerous to do so? Why was our land designed this way, and what are the repercussions of that? By raising these questions through its material, ‘Barefoot’ becomes something more than a tragic story of a truly unique artist gone too soon — it’s also a profound inquiry into the very way we have to live our modern lives”. “ – The Playlist

“One of the finest American documentary features on offer was writer/director/editor Julie Sokolow’s Barefoot: The Mark Baumer Story”… “Baumer was a nonstop social-media diarist, and Sokolow has skillfully edited his self-recorded videos—and additional material—into a moving portrait that deservedly captured the Best Documentary Premiere Prize.” – Cineaste

“An affectionate and inspiring portrait of someone who walked the walk.” Barefoot is a “clear-eyed documentary” about “a man who discarded not merely his shoes, but also the trappings and constraints of the contemporary rat race.” – The Hollywood Reporter