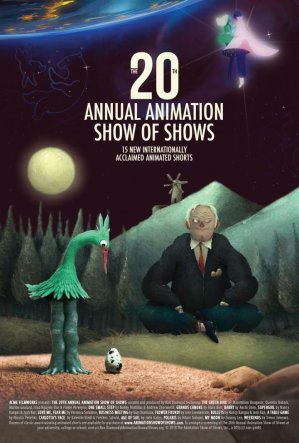 from around the world. In a year when the best and worst of human nature has been on constant display, the works in this year’s show remind us of both the universality of shared ideals, as well as the diverse challenges we face. For 20 years, The Animation Show of Shows  has been presenting new and innovative short films to appreciative audiences at animation studios, schools and, since 2015, theaters around the world. Over the years, 38 of the films showcased in The 20th Annual Animation Show of Shows  went on to receive Academy Award® nominations, with 11 films winning the Oscar®. The 20th Annual Animation Show

of Shows  not only has something for everyone, but is a remarkable and insightful microcosm of our world. According to founder and curator Ron Diamond, “Animation is such a flexible and open-ended medium that it lends itself to exploring the innumerable aspects of what it means to be human, and this year’s program, as much as any of our past presentations, really illuminates human strengths and foibles, and the bonds that unite us across cultures and generations.” Ron Diamond joins us to talk about this year’s latest collection of wonderfully creative, insightful and entertaining animation from across the globe.

For news and updates go to: animationshowofshows.com

The Vista Theatre at 4473 Sunset Blvd. in Los Angeles