Young love’s the topic of so many films, but rarely is it handled with earnest, 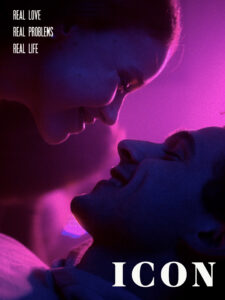 authentic grace, as we see it in Tony Ahedo’s debut feature film ICON. This moving coming-of-age drama is anchored in the compelling

performances of the lead actors Parker Padgett and Devon Hales. When a surprise  pregnancy forces Sam to facedown many brutal realities of adulthood and responsibility, things spiral rapidly out of control, as he simultaneously tries to fight to find his own truth: why his absent father hasn’t

been in his life since one, fading memory. ICON charts the   perilous journey to adulthood for our  charismatic  leads Sam (Parker Padgett) and Ana (Devon Hales). Director and writer Tony Ahedo and lead actor Parker Padgett joins us to talk about the collaboration the two of them shared in crafting a complex and nuanced portrayal of young romantic love, dysfunctional family history and relationships and flawed people, young and old, striving to do the right things.

For news and updates go to: iconfeature.com

About the filmmaker – Pretty Sweet Films founder and director Tony Ahedo started working in the film industry in 2011. Pretty Sweet Films is a central Florida based video production company led by award winning filmmaker Tony Ahedo. Our goal at PSF is to not just get the best visuals for your project, but to tell the best story. We treat every project like a film, taking the time to carefully craft every frame so it tells our audience something important. We’re all about collaboration and teamwork to deliver the film or video you want. Pretty Sweet Films is here to tell your story on your terms.  In 2015 he graduated with his BFA in Filmmaking from Ringling College of Art and Design. Right after graduation he went on to create & direct his Amazon Prime TV series Barry Baker: Aspiring Serial Killer. Tony went on and has worked on multiple feature films, TV shows, music videos and documentaries since then. A few of his past client collaborators include, Universal Sports, NBC, Bose, Lil Wayne, Zumba, and Gunplay. He is recently completed production on his next feature film ICON for Pretty Sweet Films.