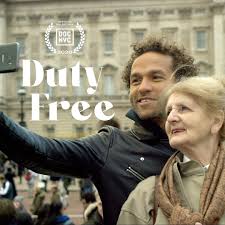 takes us into the world of his mom, Rebecca Danigelis, a British immigrant living in Boston, who has been fired

from her job as a hotel housekeeper at the age of 75. An experience that has left her financially and emotionally devastated. Her son, Sian-Pierre, is living in New York City, trying to work his way into the competitive world of TV journalism. With his mother’s reality crashing down, Sian-Pierre resolves to leave New York, and the life he expected to lead, to help his mother get back on her feet. As Sian-Pierre looks for ways to support Rebecca, he gives her an adventure spanning two continents that uncovers a surprising family saga, a story that reveals the compromises and

injustices placed on single mothers, the persistence of sexism and ageism, and the difficult dance of duty and freedom where the older and younger generations

come together. DUTY FREE and the impact campaign inspired by the film examines ageism, the care crisis, and economic insecurity in America. Who will care for and support our moms and dads? Our grandmothers and our grandfathers? Watch our film, raise these questions in your own community, and together let’s point to solutions that work for all generations. Director Sian-Pierre Regis joins us for a conversation about the challenges facing millions of families as they confront the impacts of aging love ones and how we navigate the challenges and embrace the opportunity to better understand a part of the human experience that awaits us all.

For news and updates go to: dutyfreefilm.com

To find out more about the Impact Campaign go to: dutyfreefilm.com

About the filmmaker – Sian-Pierre is currently a Firelight Media Fellow 2018-2020 and a Film Independent Documentary Fellow 2019. He is also an award-winning journalist, on-camera personality, and cultural critic with an undying love for both pop-culture and social responsibility. He has been a contributor for CNN, HLN, MTV and CBS, covering stories of youth political activism and pop-culture.