In the 2021 OSCAR® Shortlisted for Best International Feature Film, 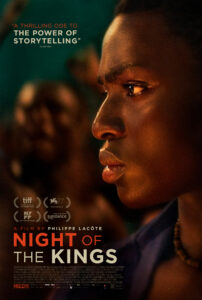 NIGHT OF THE KINGS a young man is sent to LA MACA, a prison in the middle of the Ivorian forest ruled by its inmates. As tradition goes with the rising of the red moon, he is designated by the Boss to be the new “Roman” and must tell a story to the other prisoners. Learning what fate awaits him, he begins to narrate the mystical life of the legendary

outlaw named Zama King and has no choice but to make his story last until dawn. Director Philippe Lacôte (Chronicles of War in the Ivory Coast, Run) joins us to talk about his searingly dramatic film that feels like part documentary, part narrative as it tracks a story of survival, deception, mythology and the power of storytelling.

For news and updates go to: neonrated.com/films/night-of-the-kings

IN SELECT THEATERS AND VIRTUAL CINEMAS

About the filmmaker – Writer and Director Philippe Lacote grew up in Abidjan near a movie theater – the “Magic”. His work as a director has taken on several forms, before focusing in 2002 on the recent history of his country with CHRONICLES OF WAR IN THE IVORY COAST, a film on the edge between a documentary and a diary. It is followed by the feature film RUN, the story of a wandering madman, selected in Cannes Un Certain Regard 2014. This selection confirmed his talent as a filmmaker and revealed a new voice from the African continent. NIGHT OF THE KINGS (original title “La Nuit Des Rois”), his second feature, is a dive into the largest prison in West Africa, during a night of red moon.

“A power struggle and a ritual practiced by the collective within a microcosm of society housed under the oppression of the state, and a powerful demonstration of the transporting, and liberating, power of narrative.” – Katie Walsh, Tribune News Service

“An assured, energetic piece of epic filmmaking, one that celebrates how storytelling, oration, and folklore teach us about our past so we might change our present.” – Robert Daniels RogerEbert.com

“This captivating hybrid of a movie mixes fairy-tale and storytelling elements with a vividly drawn backdrop of heightened realism… and relies on images and sounds as much as the human voice to tell its multiple stories.” – Boyd van Hoeij, Hollywood Reporter