In this intimate and revelatory new documentary VISION PORTRAITS an 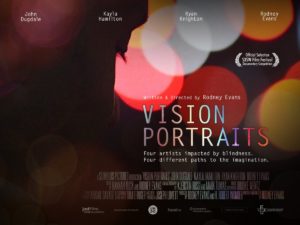 extensive eyesight loss and the possibility of total blindness didn’t shut down queer filmmaker Rodney Evans (Brother to Brother). Instead, it inspired this profoundly personal non-fiction film, which not only documents his own genetic eye disorder, but shows how three other working artists with visual impairments—photographer John Dugdale, writer Ryan Knighton, and dancer Kayla Hamilton—have adjusted their practices around their changed capacities. An intimate study of the artistic process that contemplates the relationship between the sense of sight and artistic “vision,” Evans’ film explores the quintessence of cinema: adventures in perception, subjectivity, and the imagination. Director /Producer Rodney Evans joins us for a conversation on ways in which creativity and artistic expression can manifest and how perceived limitations can be shattered.

About the filmmaker: Rodney Evans is an award-winning fiction and documentary film writer, director and producer based in New York.  His debut feature film Brother To

Brother won the Sundance Film Festival Special Jury Prize in Drama. The film had its European premiere at The Berlin International Film Festival and garnered four Independent Spirit Award nominations. His second narrative feature, The Happy Sad, played at over thirty film festivals throughout the world and had its U.S. theatrical premiere at the IFC Center in NYC and the Sundance Sunset Cinema in Los Angeles. Evans has taught at NYU’s Tisch School of the Arts, Princeton and currently teaches at Swarthmore College.

For news, screenings and updates go to: rodneyevansfilm.com

Vision Portraits is now playing in Los Angeles on Aug. 23 – 29 at the Laemmle Royal

“Evans intersperses his own experience with those of three others, finding comforting commonalities and essential differences. The result is artistically uneven in structure but emotionally powerful throughout.” – Elizabeth Weitzman, TheWrap

“Evans has made a touchingly honest ode to the inner life of all artists.”- Robert Abele, Los Angeles Times

“An extraordinary film and a desperately needed statement, one that gives a voice to the one in five Americans that live with a disability.” Sophia Stewart, Nonfics