Acclaimed filmmaker and recipient of the MacArthur Program Fellow Fellowship 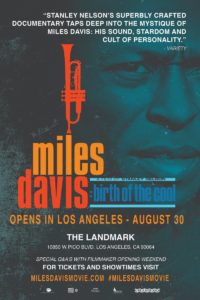 Stanley Nelson takes us on a journey through the life of a musical giant in his latest documentary film MILES DAVIS: BIRTH OF THE COOL. Miles Davis was many things including a horn player, bandleader, innovator. He was elegant, intellectual, vain, callous, conflicted, controversial, and mercurial. Miles Davis was also embodiment of cool. The man with a sound so beautiful it could break your heart. The central theme of Miles Davis’s life was his restless determination to break boundaries and live life on his own terms. It made him a star. For the people who loved him most, it also made him incredibly difficult to live with. Again and again, in music and in life, Miles broke with convention—and when he thought his work came to represent a new convention, he changed it again. Miles’s bold disregard for tradition, his clarity of vision, his relentless drive, and constant thirst for new experiences made him an inspiring

collaborator to fellow musicians and a cultural icon to generations of listeners. It made him an innovator in music—from bebop to “cool jazz,” modern quintets, orchestral music, jazz fusion, rock ’n’ roll, and even hip-hop. Featuring never-before-seen archival footage, studio outtakes, and rare photos, MILES DAVIS: BIRTH OF THE COOL tells the story of a truly singular talent and unpacks the man behind the horn. Director and producer Stanley Nelson joins us to talk about the life and times of a music genius and the uncompromising life he led.

For news, screenings and updates go to: milesdavismovie.com

“You’ll want to listen to Miles’ music after watching the film and, when you do, you might feel it a little deeper.” – Glenn Whipp, Los Angeles Times

“Miles Davis – The Birth of Cool is a must see for anyone, anywhere in any lane of life that has an infinite love of music. Especially jazz. Stanley Nelson’s best work to date pulling back the curtain on an underrated musical Picasso – Miles Davis” – Carla Renata, The Curvy Film Critic

“While previous books and films made Miles Davis look like a magical character, Nelson’s ‘Miles Davis: Birth of the Cool’ depicts the musician as what he was – a man who was driven by his art and chained by the racist society he was born into.” –  Jonita Davis, Black Girl Nerds

“If you’re a Miles Davis fanatic from way back and think you already know everything about him, the movie, with its sharply edited interviews and stunning archival reach, fills in nuances of the man that feel fresh and new.“ – Owen Gleiberman, Variety