ECHO IN THE CANYON celebrates the explosion of popular music that came out of LA’s Laurel Canyon in the mid-60s as folk went electric and The Byrds, The 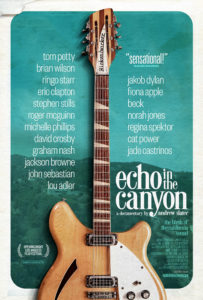 Beach Boys, Buffalo Springfield and The Mamas and the Papas gave birth to the California Sound.  It was a moment (1965 to 1967) when bands came to LA to emulate The Beatles and Laurel Canyon emerged as a hotbed of creativity and collaboration for a new generation of musicians who would soon put an indelible stamp on the history of American popular music. Featuring Jakob Dylan, the film explores the beginnings of the Laurel Canyon music scene.  Dylan uncovers never-before-heard personal details behind the bands and their songs and how that music continues to inspire today.  Echo In The Canyon contains candid conversations and performances with

For news and updates go to: echointhecanyon.com

Echo In The Canyon:

“I have a feeling Echo in the Canyon will be watched for decades into the future as the essential document of a very specific time and place that changed music forever.” – Andy Howell, Film Threat

“A richly evocative and entertainingly anecdotal overview of the 1960s Laurel Canyon music scene and its influence on contemporary artists.” – Joe Leydon, Variety

“Echo In the Canyon has the timeless appeal of a tasty riff. It’s the sunny equivalent of a tourist bus trip past the homes of famous rock stars, and director Andrew Slater carefully avoids the dark alleys.” – Noah Gittell, Washington City Paper