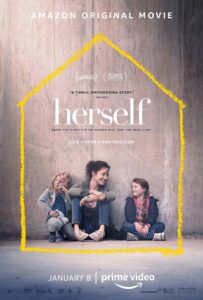 to escape her abusive partner with her two young children, only to find herself trapped in temporary accommodation. After months of struggling, she draws inspiration from one of her daughter’s bedtime stories and hits upon the idea of self-building an affordable home. She finds an architect who provides her with plans and is offered land by Peggy (Harriet Walter), a woman she cleans for. Aido (Conleth Hill), a building contractor, appears willing to help, too. In order to do so, she must escape the grip of a possessive ex-partner, circumnavigate a broken housing

system, and bring together a community of friends who can support her and lend a helping hand. But as her past rears its head in the form of Gary (Ian Lloyd Anderson), her possessive ex, and as bureaucrats fight back against her independent spirit, will Sandra be able to rebuild her life from the ground up? Director Phyllida Lloyd (The Iron Lady, Mama Mia!) joins us to talk about her beautifully rendered story about a young woman who refuses to give up on her girls, her her life and her dreams.

For news, screenings and updates go to: herself.film

About the filmmaker – Director Phyllida Lloyd studied English and drama at Birmingham University and is now widely known for her award-winning work in theatre, opera and film. Her opera credits include La Bohème, Albert Herring, Carmen and Peter Grimes for Opera North, The Carmelites for English National Opera and Welsh National Opera, The Handmaid’s Tale for Royal Danish Opera and ENO, the Ring cycle and a staged production of Verdi’s Requiem for ENO, Macbeth for Paris Opéra and an award-winning film of Gloriana for BBC2. Her theatre and musical credits include Josephine and I (Bush Theatre/Public Theatre, New York), Mary Stuart (Donmar Warehouse, West End and Broadway; winner of a 2006 South Bank Show Theatre Award), Six Degrees of Separation and Wild East (Royal Court), Henry IV and Julius Caesar (Donmar Warehouse/St Ann’s Warehouse), Pericles, The Duchess of Malfi, What the Butler Saw, The Way of the World and The Prime of Miss Jean Brodie (National Theatre), The Virtuoso and Artists and Admirers (Royal Shakespeare Company) and the global musical hit Mamma Mia!. Lloyd directed the film of Mamma Mia! in 2008, which went on to make over $600 million worldwide. She also directed The Iron Lady in 2011, which went on to win a Best Actress Oscar for its star, Meryl Streep, as well as grossing over $100 million at the box office.

“A stunning, taut performance from actor and co-writer Dunne cuts through a flurry of clumsy good intentions to convince. The film is at its most powerful when it rests on her traumatised face.” – Fionnuala Halligan, Screen International

“So many films are branded ‘urgent’ nowadays, but in the case of Herself the term really does feel apt.” – Hannah Woodhead, Little White Lies

“With her elegant, restrained and quietly devastating performance as a headstrong yet financially struggling single-mother of two young girls, Clare Dunne is a revelation [in Herself].” – Tomris Laffly, RogerEbert.com

“If there is a lot of “happy coincidence” driving the plot, Dunne gets away with it by constructing this tale of female resilience and community from the ground up, through well-observed moments between mother and daughters.” – Amber Wilkinson, Times (UK)