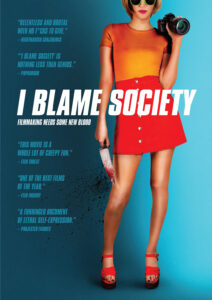 struggling filmmakers in L.A. who just can’t seem to get the money for their first feature. Feeling like her friends and her partner (Keith Poulson) are losing faith in her abilities, she decides to resurrect her abandoned documentary based on a pseudo-compliment she once received that she would make a good murderer. But while she documents what makes “the perfect murder” a hitherto unseen dark side of Gillian emerges and grows. Furthermore the problem with being a successful serial killer, she discovers, is keeping the whole thing stealth, denying her the recognition that she craves… and that unhinges her even

more. After accidentally-ish killing her best friend (Chase Williamson), Gillian goes on a killing spree culminating with a final bloody act that nobody would dare deny her credit for. I BLAME SOCIETY is razor-sharp satire of the pitfalls of post-#MeToo culture in Los Angeles. Director, writer and lead actor Gillian Wallace Horvat (Kiss Kiss Fingerbang) joins us to talk about her gleefully disturbing feature film debut that delves into the psyche of a young woman trying to believe in her dreams and herself… and facing the darkness that lurks inside in this macabre Cinderella story.

For news and updates go to: crankedupfilms.com/IBlameSociety

About the filmmaker – Gillian Wallace Horvat is a Los Angeles-based filmmaker, writer, and film programmer. Her first short film, GUNPLAY, was a 2007 Wasserman Semi-Finalist and the only film to ever receive a disclaimer for graphic content at NYU Tisch’s First Run Film Festival. KISS KISS FINGERBANG, starring Anton Yelchin, Kate Lyn Sheil, and Buck Henry was awarded the Jury Prize in the Midnight Shorts category at the 2015 South by Southwest Film Festival; it later premiered online as a Vimeo Staff Pick. Miriam Bale wrote in Indiewire that. Gillian is one of “the most exciting American indie filmmakers I can think of.” Her films have screened in festivals around the world including SXSW, Fantasia, Palm Springs International Short Film Festival, Maryland Film Festival, Yale University, and many others. Gillian also produced A FULLER LIFE, a documentary on the life and films of director Samuel Fuller that premiered at the 2013 Venice Film Festival. Recently she has produced documentary shorts for Arrow Films, Kino Lorber, and Olive Films, working on projects ranging from an AMERICAN NINJA box set to Orson Welles’ MACBETH. She is also a guest columnist for Filmmaker Magazine and her writing has appeared in Sight & Sound.

“I Blame Society is a pretty startling and original film. Writer-director-star Horvat explores the dark comedy genre on her own terms, and has the courage to keep upping the ante – right until the very end.” – Frank J. Avella, Edge Media Network

“In some ways, I totally believe that you have to be at least a little bit insane to want to follow an artistic career path. I Blame Society takes that ball and runs with it to a successfully awesome finish line.” – Lorry Kikta, Film Threat

“Writer/director/actress/mischievous malcontent Gillian Wallace Horvat’s I Blame Society is a wry, anarchic mockumentary that will almost immediately turn some people all the way the hell off. Pity those poor, incorrect fools.” – Ryan Syrek, The Reader (Omaha, NE)

“The originality of story and filmmaking is a sight to see, and its narrative is an exquisite example of how quickly the thin line between reality and art can blur.” – Stephanie Archer, Film Inquiry