JUMBO is the coming-of-age story of Jeanne, a shy young woman, l 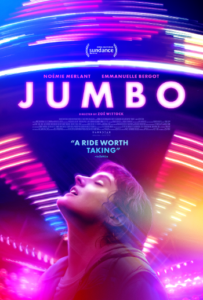 ives at home with her uninhibited bartender mother and works the graveyard shift as a cleaner at an amusement park. Her mother wants her to meet a man, but Jeanne prefers tinkering in her bedroom with wires, light bulbs, and

spare parts, creating miniature versions of theme park rides. During her late-night shifts she begins spending intimate time with the alluring new Tilt-A-Whirl ride that she decides to call JUMBO. Finding herself seduced by “his” red lights, smooth chrome, and oily hydraulics, Jeanne concludes that the thrilling new relationship she wants to pursue is with JUMBO.

Director and writer Zoé Wittock (A demi-mot, Le Silence de l’Aube) joins us for a conversation on the challenging logistics of filming at amusement park, crafting a nuanced look at sexuality and social norms and the personal journey of the filmmaker in selecting the amazing Noemie Merlant for the role of Jeanne.

For news and updates go to: zoewittock.com

About the filmmaker – Zoe Wittock is an award winning writer and director. Originally hailing from Belgium, Zoé grew up living around the world and trained at the prestigious directing program of the American Film Institute (AFI), in Los Angeles, where she graduated the youngest and top of her class, while being awarded the “Hal and Robyn Berson” scholarship for excellence in directing. In France, she directed her last short film “A demi-mot”, broadcasted on OCS and Netflix, before making her feature film debut with “Jumbo” which went on to many selections around the world, including Sundance and the Berlinale, where she was awarded a prize in the Generation section. She was also a nominee for the Discovery Prize at the European Film Awards and was named in Hollywood Reporter’s list of the 20 female filmmakers to watch in 2020. As an active member of the SRF (French association of Film Authors), Zoe campaigns for greater equality in films, while advocating for the protection of author’s right in the ever-changing industry. For more go to: zoewittock.com

Director’s Statement – When I was still living in the United States, I stumbled upon an article describing the incredible story of Erika Labrie, an Olympic gold winner in archery, who got married to the Eiffel tower in 2004 and became Erika Eiffel. She was said to suffer from the “Objectum sexual” condition. It struck me as the most improbable story, but it encouraged me to think further: How did she become like that? What draws her to objects? How does she experience her love? When did she know? So I contacted her… Only to realize she was one of the most grounded people I had ever met. The contrast was fascinating. Satisfying ourselves within the confines of what we know can be very limiting. Being Belgian, I grew up with the influences of famous surrealist artists such as Magritte or Nougé who excelled at twisting reality and objects through extreme visuals, thus allowing for the unconscious to express itself. They gave new meanings to daily commodities, while revolutionizing our perception of traditional art and everyday preconceptions of life. The concept of falling in love with a landmark object may of course be hard to grasp at first, but this unconventionality is the mere reason that I chose to seek interest in this extraordinary coming of age story. Whilst providing a seductive and poetic adventure based on strong colorful visuals, I wanted to question what one defines as normal versus monstrous, at a time where I was personally questioning my own identity and place in this world. However if I were to undertake such a romance, I knew that had to use all the power that fiction had to offer. I ought to find the perfect object, one that would allow for the richest communication through sound, movement, lights or any other means available to the cinematographic language. Being particularly sensitive to my environment, I felt that an amusement park and its surroundings would be pivotal in setting the fantastical tone needed to believe and be moved by our character’s journey. Lyrically transporting you from one scene to the next, using humor in very dramatic moments, this film seeks to make a statement about tolerance and the freedom of one’s own choices. It is a modern take on love and its infinite possibilities. – Zoe Wittock

“Merlant’s writhing, fainting spells and intense gaze do well to communicate the intensity of desire and, although the film can sometimes be a dizzying attraction to climb on, Jumbo is certainly worth the ride.” – Adesola Thomas, Paste Magazine

“So will Jumbo take Jeanne’s heart for a ride? And should we object to her sexuality if she’s not hurting anyone? These questions, and more, abound in the out-there, but not-like-anything-else-out-there, “Jumbo.” – Michael Ordoña, Los Angeles Times

“First time writer-director Zoé Wittock takes an absurd idea and imbues it with such heart, soul, and beauty that you’ll automatically look past the inherent ridiculousness. Instead, you’ll simply absorb its glowing sense of wonder.” – Richard Whittaker, Austin Chronicle

“Jumbo, a unique and beautiful addition to the coming-of-age genre, gives us a tender exploration of a young woman’s journey of a first romance and discovering her sexuality along the way.” – Alysha Prasad, One Room With A View