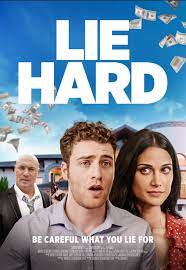 league girlfriend, Katie (Melanie Chandra). After Rob makes a poor impression on Katie’s wealthy father (Patrick Kilpatrick) Rob aims to impress him by borrowing millions of dollars from Big Sally, a vicious crime boss (Catherine Curtin), to purchase a mansion and fake his own wealth. After his plan succeeds and Rob is welcomed by Katie’s family with open arms, the crime boss alters the deal and Rob needs to scramble to pay the money back by the end of the week. Big Sally leverages

Rob’s job at a real estate development company to get him to sabotage contracts in her favor, her scheme all along. Unfortunately for Rob, the weight of his lies gets him fired, rendering the scheme useless and putting Rob further into jeopardy. Like all of his dishonest plans, this one spirals out of control