Directed, produced, and written by Jeff Kaufman and produced by Marcia S. Ross (Terrence McNally: Every Act of Life) NASRIN is 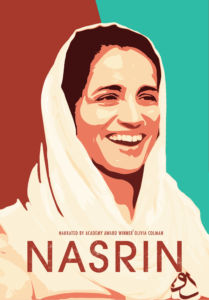 an immersive portrait of one of the world’s most courageous human rights activists and an outspoken leader of Iran’s remarkably resilient women’s rights movement. She is currently in the fifth week of a hunger strike and serving a long sentence in Iran’s notorious Evin Prison. Millions of people from over 200 nations have called for Nasrin’s release including President-elect Joe Biden; journalist

filmed in Iran by men and women who risked arrest, NASRIN features interviews with acclaimed filmmaker Jafar Panahi, Nobel Peace laureate Shirin Ebadi, journalist Ann Curry, and Nasrin’s husband and fellow-activist Reza Khandan. NASRIN is narrated by Oscar® winning actress Olivia Colman and also features an original song by Tony Award®-winning composers Lynn Ahrens and Stephen Flaherty and performed by 4-time Grammy® winner Angélique Kidjo. In addition, Washington Post columnist and former political prisoner Jason Rezaian serves as one of the film’s Executive Producers. Director Jeff Kaufman and Producer Marcia S. Ross join us to talk about one of the world’s most courageous woman and about the daily challenges she and other civil and women’s rights activist face in one of the world’s most repressive regimes.

Update on Nasrin: As of today, Nasrin Sotoudeh has been ordered

back to prison in Iran. Earlier last month, she was released from prison due to health reasons and the corona -19 virus. Then, she had just ended her 40+ day hunger strike at the end of October in Iran’s notorious Evin Prison. Please join us in telling her story and amplifying her voice for her freedom. Nasrin hashtag #StandUp4NASRIN continues to grow daily.

For news, screenings and updates go to: nasrinfilm.com

About the filmmaker – Jeff Kaufman produced, directed, and wrote the documentaries Every Act Of Life (2018 Tribeca premiere, aired June 2019 on American Masters), The State of Marriage, Father Joseph, The Savoy King: Chick Webb and the Music That Changed America, Brush With Life: The Art of Being Edward Biberman, and Education Under Fire, plus a number of short films for Amnesty International, and programs for The Discovery Channel, and The History Channel. He also edited/designed a book based on the film Every Act Of Life, contributed cartoons to The New Yorker, and illustrations to The Los Angeles Times and The New York Times, wrote/illustrated several children’s books, and hosted daily radio shows in Vermont and Los Angeles.

About the filmmaker – Marcia Ross produced the documentaries Every Act Of Life, The State of Marriage, Father Joseph, and The Savoy King. Additionally she has an over 3-decade career as an independent casting director and casting executive, serving 16 years as EVP for Casting at Walt Disney Motion Pictures, and 5 years as VP for Casting and Talent Development at Warner Brothers TV. Some of her film and television credits include Clueless, Cujo, thirtysomething, Murder in Mississippi, 10 Things I Hate About You, The Princess Diaries, Romy and Michele’s High School Reunion, The Lookout, Enchanted, Oblivion, and Parental Guidance. She has received career achievement awards from the Casting Society of America and the Hollywood Film Festival.

“Nasirin reaffirmed my faith in the humanity and courage of those in Iran who struggle against a repressive regime.”- Robert Denerstein, Denerstein Unleashed

“Nasrin is a moving portrait of an unforgettable fighter and a vital film that should be seen by audiences around the globe.” – Loren King, AWFJ Women on Film