In this extraordinary documentary, WHEN LAMBS BECOME LIONS we are immersed in the Kenyan bush, as a small-time ivory dealer fights to stay on top while forces 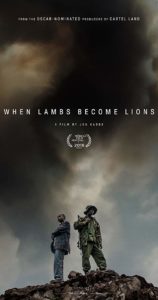 mobilize to destroy his trade. When he propositions his younger cousin, a conflicted wildlife ranger who hasn’t been paid in months, they both see a possible lifeline. The plummeting elephant population in Africa has captured the attention of the world, and as the government cracks down, both poachers and rangers face their own existential crises— what is the value of elephant life relative to human life? And can we understand these hunters who will risk death, arrest, and the moral outrage of the world to provide for their families? The photography in this film is so stunning that many people forget they’re watching a documentary, and it’s probably why WHEN LAMBS BECOME LIONS was just nominated for two 2019 IDA Documentary Awards (Best Cinematography and Best Editing). WHEN LAMBS BECOME LIONS is told in the style of “embedded” filmmaking with an intimate and strikingly honest look at elephant poaching in Kenya, told from both perspectives — the poachers and the rangers who pursue them. At its core, WHEN LAMBS BECOME LIONS is the human side of why people do what they do

given their circumstances. An angle not many people think about when they hear “elephant poaching”. WHEN LAMBS BECOME LIONS is executive produced by Academy Award-nominated filmmaker Matthew Heineman (Cartel Land) and directed by Emmy Award-winning filmmaker and Doc NYC 40 Under 40 honoree, Jon Kasbe. Kasbe followed his subjects over a three-year period, gaining an extraordinary level of access and trust on both sides of the ideological and ethical spectrum. The result is a rare and visually arresting look at the perspectives and motives of the people at the epicenter of this conservation crisis. Director Jon Kasbe joins us to talk about the making of his riveting film, gaining the confidence of the film’s subjects and navigating the many ethical questions he confronted during the making of When Lambs Become Lions.

For news, screenings and updates go to: whenlambs.oscilloscope.net

For more on Director Jon Kasbe go to: jonkasbe.com

“A probing view of how a failed African state allows poaching to continue, no matter the lofty speeches of its new president. When people are desperate, they turn to crime–including poaching.” – Louis Proyect, Counterpunch.org

“Documents how this daily struggle binds together the inhabitants of Northern Kenya, both man and beast, and explores how questions of morality and mortality become increasingly complicated in such a savage landscape.” – Nikki Baughan, Screen International

“Kasbe nudges us to remember the importance of food on the table – for all Kenyatta’s show of might, wouldn’t a better situation be kindled by simply paying people what they’re owed?” – Amber Wilkinson, Eye for Film