The riveting new documentary film THE CLEANERS takes us into the hidden third world shadow industry of digital cleaning, where the Internet rids itself of what it 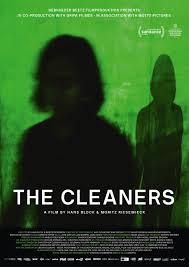 doesn‘t like. Here we meet five “digital scavengers” among thousands of people outsourced from Silicon Valley whose job is to delete “inappropriate” content of the net. In a parallel struggle, we meet people around the globe whose lives are dramatically affected by online censorship. A typical “cleaner” must observe and rate thousands of often deeply disturbing images and videos every day, leading to lasting psychological impacts. Yet underneath their work lie profound questions around what makes an image art or propaganda and what defines journalism. Where exactly is the point of balance for social media to be neither an “unlegislated” space nor a forum rife with censorship? THE CLEANERS struggles to come to terms with this new and disconcerting paradigm. Evolving from a shared social vision of a global village

to a web of fake news and radicalization, the film charts the rise and fall of social media’s utopian ideology.  We talk about THE CLEANERS role managing what is seen and not seen on the internet, who are they, what are the criteria and why are the companies who are paying them so determined to remain hidden. Co-director Moritz Riesewieck (Hans Block) joins us for an engaging and provocative conversation on the lack of transparency and unaccountability from the people who have promised the world the opposite.

For news and updates go to: The Cleaners

“The chilling, morally hyper-conscious film “The Cleaners”… introduces us to a handful of these hidden, meagerly paid office workers, cogs in a shadow business headquartered mainly in Manila in unassuming buildings.” – Robert Abele, Los Angeles Times

“The Cleaners is a riveting piece of work, prompting reflection on a whole range of big, urgent questions.” – Jake Wilson, The Age Australia

“It is the starting point for a wide-ranging examination of complex issues surrounding freedom of speech, censorship and corporate responsibility.” – Allan Hunter, Screen International

“With its excellent cinematography, ominous tone and incredibly relevant subject matter, The Cleaners is a masterclass in documentary filmmaking.” – Adam Patterson, Film Pulse