SADIE is the story of a 13-year-old girl who lives at Shady Plains Trailer Park with her mother while her father serves repeated tours in the military. Her dad has 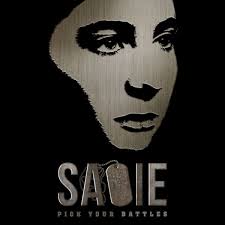 broken many promises that he will return, but Sadie (Sophia Mitri Schloss) idolizes him and believes in his cause, so she waits, preserving his place on the home-front. Less patient is her mom, Rae (Melanie Lynskey) who stopped receiving letters or calls from her husband years ago. She has been half-heartedly dating the counselor from Sadie’s school, Bradley (Tony Hale) but it isn’t until a mysterious newcomer moves in next door that she truly considers moving on. Rae’s best friend is Carla (Danielle Brooks,) who works at the local bar and has a penchant for unavailable men. Carla’s son Francis

(Keith L. Williams) and her retired father Deak (Tee Dennard) are Sadie’s charge and confidante, respectively. The arrival of Cyrus (John Gallagher, Jr.) disrupts the balance of life at Shady Plains. When Sadie sees a relationship developing between Cyrus and Rae, she pledges to come between them, whatever it takes. Cyrus becomes the enemy, and if she’s learned nothing else from the world she inhabits, it’s that the enemy deserves no mercy. Director and Writer Megan Griffiths joins us to talk about her gritty, heartfelt drama about class, addiction and growing up on the margins.

For news and updates go to: sadiefilm.com

Q&A with producer Lacey Leavitt on 10/12 and with Lacey, writer/director Megan Griffiths and actor Tee Dennard on 10/13

“…as a character study of a young, simmering, resentful girl cheated by circumstance and life at a crucial age, the drama’s combative, aggrieved center is earned, authentic and genuinely tragic.” – Ally Johnson, The Playlist

“Set in the close-knit, secret-filled world of a trailer park, the film is an emotionally violent coming-of-age story crafted with vivid detail.” – John Fink, The Film Stage

“By once again venturing into a place that few too other filmmakers are willing to look, Griffiths delivers a drama that crackles with a sense of discovery, not only for the characters onscreen, but for audiences who so rarely see people who could so easily be their neighbors given the dignity of having their stories told on screen.”  – Stephen Saito, Moveable Fest