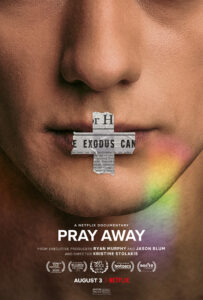 with the words “I lived transgender, but I left it all to follow Jesus.” So explains self-identified ‘ex-trans’ Jeffrey, whose belief that change is possible reflects the core message of the conversion therapy movement today. Former leaders of the “pray the gay away” movement contend with the aftermath unleashed by their actions, while a survivor seeks healing and acceptance from more than a decade of trauma From there, PRAY AWAY takes us back to the 1970s, five men struggling with being gay in their Evangelical church started a bible study to help each other leave the “homosexual lifestyle.” They quickly received over 25,000 letters from people asking for help and formalized as Exodus

International, the largest and most controversial conversion therapy organization in the world. Julie is one of hundreds of thousands of people caught in Exodus’ wake. Former leaders of the “pray the gay away” movement contend with the aftermath unleashed by their

actions, while a survivor seeks healing and acceptance from more than a decade of trauma. After years as Christian superstars in the religious right, Julie and many have come out as LGBTQ, disavowing the very movement they helped start. PRAY AWAY chronicles

that movement’s rise to power, persistent influence, and the harm it causes. Director Kristine Stokalis and Producer Anya Rous join us to talk about the politicalization of gay rights in the 1980s by the Far Right led by Jerry Falwell, Pat Robertson, Newt Gingrich and James Dobson, as well as the psychological, religious, cultural, and economic pressure brought to bear on people who live a non-conforming sexuality.

For news, screenings and update go to: prayawayfilm.com

Watch Pray Away on Netflix beginning on August 3

About the filmmaker – Kristine Stolakis (Director/Producer) is a documentary film director whose work wrestles with politics, prejudice, and power. Her debut feature PRAY AWAY takes you inside the history and continuation of the “pray the gay away” or ex-gay movement, and is a Multitude Films production. It is supported by the Catapult Film Fund, Tribeca Film Institute, Hartley Film Foundation, Chicken & Egg Pictures, and SFFilm. Her directorial debut THE TYPIST (Hot Docs 2015) cracks open the untold story of a closeted Korean War veteran tasked with writing the military dishonorable discharges of outed LGBTQ seamen. It was released by KQED and is currently a Vimeo Staff Pick. WHERE WE STAND (DOC NYC 2015) chronicles a group of Mormon women fighting for equal rights inside their church, and was released by The Atlantic and nominated for a Student BAFTA. She also produced ATTLA (Independent Lens 2019), a co-production of ITVS and Vision Maker Media. Her filmmaking approach is shaped by her background in anthropology, journalism, politics, and community art. She holds an MFA in Documentary Film from Stanford University, where she currently lectures, a BA in Cultural Anthropology from New York University, and has received further training at UC Berkley’s Investigative Reporting Program. She proudly hails from North Carolina and central New York. She is the founder of Lamplighter Films.

About the filmmaker – Anya Rous is a Brooklyn-based Producer and Vice President of Production at Multitude Films, an independent production company dedicated to telling stories by and about underrepresented communities. Anya co-produced the following critically-acclaimed films: ALWAYS IN SEASON (Independent Lens), which premiered in competition at the 2019 Sundance Film Festival and won the Special Jury Award for Moral Urgency, THE FEELING OF BEING WATCHED (Tribeca 2018, PBS) dubbed “a journalistic thriller” by The New York Times, and NAILA AND THE UPRISING (IDFA 2017, PBS), and co-executive produced CALL HER GANDA (Tribeca 2018, PBS). Anya brings a combined 10 years of experience in funding strategy and impact campaigns for stories that further movements for racial, economic, and gender justice. She formerly served as the Director of Strategic Relationships at Just Vision, as a grantmaker at the Nathan Cummings Foundation, and the coordinator of a multi-state oral history project at the Bob Bullock State History Museum in Austin, TX. Anya is a Sundance Creative Producing Fellow and an Impact Partners Documentary Producing Fellow. She is also on the board of Jews for Racial and Economic Justice.

“Pray Away invites the viewer into a world that many would like to think doesn’t exist much anymore, but is in fact, quite prevalent.” – Brian Shaer, Film Threat

“Such visual reenforcement is constant, as we see footage of many so-called “ex-ex-gays” when they were being tortured by their ministries alongside footage of them looking far happier after they escaped.” – Dan Callahan, TheWrap

“Pray Away is an essential film for my fellow Evangelicals, who need to see the gay Christian issue from a different perspective that we’ve been resistant to see from the beginning.” – Alan Ng, Film Threat

“Pray Away gives a platform for these individuals to tell their story, and even to speak against conversion therapy, providing a chance for forgiveness and salvation.” – Stephanie Archer, Film Inquiry