In 1921, white mobs in Tulsa terrorized and burned down the Greenwood District, 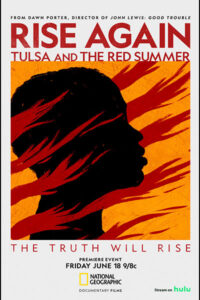 known as “Negro Wall Street.”  With the discovery of a mass grave, the city reckons with its painful past.  In the early 20th century, racial violence erupted in dozens of cities across the United States. Hundreds were killed. Black communities fought back, rebuilt, and prospered in the face of extreme oppression and the evils of white supremacy.  RISE AGAIN: TULSA AND THE RED SUMMER comes one hundred years from the two-day Tulsa Massacre in 1921 that led to the murder of hundreds of Black people and left thousands homeless and displaced. Award-winning Washington Post journalist and Oklahoma native DeNeen Brown is at the heart of the film, reporting on the search for a mass grave in her native state. Digging into the events that led to one of the worst episodes of racial violence in America’s history, Brown

reveals insights into racial conflict incidents that erupted in the early 20th century. Between 1917 and 1923, when  Jim Crow laws were at their height and the Klu Klux Klan was resurging across the nation, scores of Black homes and businesses were razed, and hundreds of Black people were lynched and massacred with impunity. Brown’s reporting highlights the revived call for

justice for victims and survivors. Following a 2018 investigative report, Brown explores the current anti-racism movement in the context of the Tulsa Massacre and the Red Summer. With access to family members of those killed, city officials, archeologists, and historians, the film reveals the decades-long effort by descendants

and community members to find victims’ bodies and unearth truths that have been suppressed for nearly a century. RISE AGAIN: TULSA AND THE RED SUMMER also untangles the role the media played in covering events at the time in order to reveal the full extent of the nation’s buried past. Director Dawn Porter joins us for a sobering conversation about the shameful abandonment of Reconstruction, the shameless racism of President Wilson, the planned, military grade assault on the Tulsa’s Black community of Greenwood and the buried, figuratively and literally, history that continues to haunt our country.

About the filmmaker – Dawn Porter’s is an award-winning filmmaker, producer, and mental health/social justice advocate who has emerged in the entertainment industry as a leader in the art of storytelling. She made her feature directorial debut in 2013 with Gideon’s Army, which premiered on HBO, was nominated for an Independent Spirit Award and an Emmy, won Best Editing at Sundance, and is now part of the U.S. Department of State’s American Film Showcase. Her 2016 film Trapped, which explores laws regulating abortion clinics in the South, won the Special Jury Social-Impact Prize at the Sundance Film Festival, and a Peabody Award. She is set to direct and executive produce Oprah Winfrey and Prince Harry’s upcoming documentary series on mental illness and mental well-being for Apple TV+. For more go to: trilogy-films.com