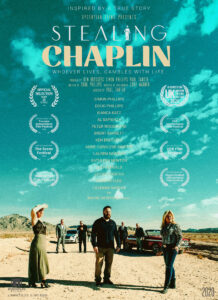 was inspired by a surreal plot that took place over 40 years ago. Two Las Vegas based con men decided to dig up and steal the corpse of the legendary silent-era comedian Charlie Chaplin in order to ransom it. The bizarre plot grabs the attention of the nation and sets in motion an escalating reward offer by the family. Before long every local lowlife, criminal and dirty cop is looking to cash in on the easy money. STEALING CHAPLIN is driven forward by a slew of quirky but captivating performances that includes the film’s co-writers Simon Phillips (Age of the Living Dead, No

Easy Days), Doug Phillips (Not All Who Wander, Butchers) and producer Ken Bressers (The Nights Before Christmas, Not All Who Wander). The prolific British director Paul Tanter (The Nights Before Christmas, Dystopia, and Kill Ratio) joins us to talk about the inspiration for the film, finding the right tone for a multi-genre story and the lightning fast pace he and his crew worked at to make STEALING CHAPLIN.

Ahead of North American VOD/Digital Platform & DVD on May 4