Director Benjamin Ree’s latest documentary, THE PAINTER AND THE THIEF, 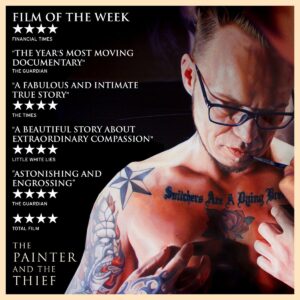 tracks the journey of young Czech artist Barbora Kysilkova after relocating from Berlin to Oslo to launch her career as a painter. In April of 2015, her two most valuable, large-format paintings are stolen – with care – in broad daylight from the window fronts of Galleri Nobel in Oslo’s city center. Desperate for answers about the theft of her paintings, Barbora is presented with an unusual opportunity to reach out to one of the men involved in the heist – Norwegian career criminal, Karl-‘Bertil’ Nordland. Ree begins to document the story after Barbora unbelievably invites her thief to sit for a

portrait, capturing the unlikely relationship that ensues as the equally damaged duo find common ground and form an inseparable bond through

their mutual affinity for art. Over three years, THE PAINTER AND THE THIEF follows the incredible story of the artist looking for her stolen paintings, while at the same time turning the thief into art. Director Benjamin Ree (Magnus) joins us for a lively conversation about gaining the confidence of these two very complex people and why it was important for him to craft a story where Barbara and Karl resilience and humanity shone through.

To watch go to: neonrated.com/the-painter-and-the-thief

Director’s statement – “From the moment I began filming I wanted to explore the complex friendship between the painter and the thief. Two questions were the driving motor: What do we humans do to be seen and appreciated, and why do we help others? For me, filmmaking is about asking intellectually stimulating and emotionally engaging questions through observing human behavior. I hope I have managed to raise some intriguing questions with this film, questions you will think about long after the end credits. I have also tried to push the cinema verite form onto a new path, with several perspectives jumping back and forth in time, revealing new layers of the friendship throughout the whole film. I have worked hard to find a cinematic form to suit the content for each scene, that reflects the inner state of the characters.” – Benjamin Ree

About the filmmaker – Benjamin Ree is a Norwegian documentary filmmaker. In the beginning of his career he worked for BBC and Reuters. Today he makes award winning short and feature documentary films. Ree’s first feature documentary is Magnus, which premiered at Tribeca Film Festival in 2016, and was sold to 64 countries. The film is a coming of age story of a modern genius, Magnus Carlsen, who is the world’s best chess player. The film won many awards at festivals around the world. Ree’s second feature is The Painter and the Thief, premiered at World Documentary Competition at Sundance Film Festival in 2020 and won a Special Jury Award for Creative Storytelling. Benjamin Ree works for the production company and broadcaster VGTV, which co-produced Magnus and The Painter and the Thief. For more on the filmmaker go to benjaminree.com

“Benjamin Ree’s extraordinary documentary feels like a movie – there’s a heist, villains who are not what they seem, scenes of striking intimacy and some fabulous twists.” – Ed Potton, Observer (UK)

“It ends up being about friendship, addiction, and the power of art — but also the cost of art. Throughout it all, the spine of this movie is the rich, layered, and complicated friendship between these two people.” Angie Han, FilmWeek (KPCC – NPR Los Angeles)

“[A] strange, delicately made film, which manages to defy expectations about both of its subjects and the power balance between them.” – Alison Willmore, New York Magazine/Vulture

“[T]here are moments so intimate and unguarded that you may briefly dissociate and question what you’re watching – a documentary, or its carefully scripted and acted narrative counterpart.” – Justin Chang,

“So compelling is “The Painter and the Thief” – and ultimately so powerfully moving in its faith in human resilience – that you may not notice the illuminating ways in which Ree plays with form and viewpoint.” – Ty Burr, Boston Globe

“A story of deeply human connection between two souls that actually see each other, and the healing power wrapped up in that sense of visibility.” – Katie Walsh, Tribune News Service