This riveting new documentary from the team of Director Joe Saunders 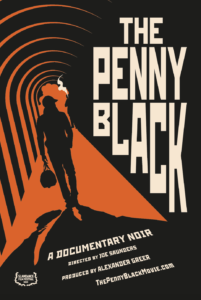 and Producer Alex Greer The Penny Black, is a non-fiction investigative thriller that begins when Will, the estranged son of a

conman, agrees to safeguard a mysterious million-dollar stamp collection for his shady Russian neighbor. After the neighbor vanishes \without a trace, Will searches for the collection’s true owner, confronting his

fear and integrity head-on. But when some of the  stamps suddenly disappear,  the filmmakers are forced to reexamine Will’s capacity for honesty. Director Joe Saunders and Producer Alex Greer joins us for a rollicking \conversation on the orgin story of Penny Black, meeting Will, the arduous journey of pulling together the financing and the hundreds of hours of stake outs, interviews, and looking over their shoulders that went into making this stranger -than-fiction, trust no one documentary thriller.

For news, updates and screenings go to: thepennyblackmovie.com

The Backstory – The Penny Black STAMP is the world’s first adhesive postage stamp. It’s notoriety made it easy to google among this massive collection. Coincidentally, this little stamp comes with its own nefarious 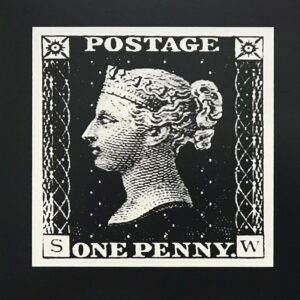 origins. Issued in the United Kingdom on May 1st, 1840, the Penny Black didn’t take long before it was the subject of mass fraud. The stamps, due to their color, were canceled with red ink to prevent their reuse. Unfortunately, this red ink was water-soluble, which meant that the stamps could be washed and reused. To curb the rampant fraud, the Penny Red was introduced a year later to allow cancelations with black ink that were not water soluble and could not be removed. The striking design of the Penny Black was then consigned to stamp albums (there, ironically, to become a target of high value theft).

About the filmmaker: Joe Saunders began his filmmaking career at NFL Films producing and directing documentaries that aired on HBO, FOX, ABC, CBS, ESPN, NFL Network and the BBC. While at NFL Films, Saunders won an EMMY Award in the Outstanding Long Feature category for his documentary, Big Charlie’s. His recent documentary credits include, Billy Mize and the Bakersfield Sound and Coach Snoop. Saunders is a Film Independent documentary fellow, received an MFA from Columbia University’s School of the Arts, and currently lives in NYC.

About the filmmaker:  Alexander Greer is an award-winning filmmaker whose work has screened at Tribeca Film Festival, Austin Film Festival, and Los Angeles Film Festival, amongst others. As a freelance producer, he’s created content for MTV, Funny or Die, RedBull TV, Warner Brothers Records, Columbia Records, Gatorade, and New Form Digital. He graduated with honors from the film program at Columbia University, and currently lives in Los Angeles.

“The Penny Black” is an utterly-engrossing…film laid out like a private eye thriller”  – Roger Moore, Movie Nation

“A truth is stranger than fiction thing. It would make for a great Chandler-esque fiction movie, too.” – Peter Rainer, FilmWeek (KPCC – NPR Los Angeles)

“’The Penny Black’ keeps you off-balance because you don’t know whether or not Will is conning Saunders and us.” – Bob Bloom, Journal and Courier

“…just as you catch your breath the roller coaster ride sends you for one more drop.” – Joe Compton, Go Indie Now

“…one of 2020’s most riveting documentaries” – Kayla McCulloch, The Lens

“The Penny Black” is a mystery and an enigma wrapped in a documentary’ – Bob Bloom, ReelBob