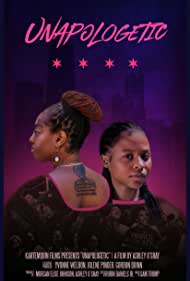 administration complicit in state violence against its Black residents. Told through the lens of Janaé and Bella, two fierce abolitionist

leaders, UNAPOLOGETIC is a deep and insightful look into the Movement for Black Lives, from the police murder of Rekia Boyd to the election of Chicago Mayor Lori Lightfoot. The release of UNAPOLOGETIC serves as a nod to Black August, an annual commemoration to remember Black freedom fights and political prisoners, highlighting Black resistance against racial oppression. Notable historical moments

include the March on Washington (1963), the Haitian Revolution (1791), and Nat Turner’s Rebellion (1831). The film captures tensions between a police board led by Lori Lightfoot (now Chicago Mayor) and abolitionist organizers at Chicago Police Department Headquarters. Director Ashley O’Shay joins us for a conversation on why she chose to follow Janae and Bella, her abiding commitment to a historically crucial moment in the American experiment and why the voice of Black women are uniquely qualified to play a critical role in our collective future.

For news, screenings and updates go to: unapologeticfilm.com

Director’s Statement – I never imagined that I was on the precipice of capturing what will likely be one of the biggest movements of all time. What is so captivating to witness is the tapestry of this Black queer feminist movement that lies at the helm of fighting for all Black rights. After a historical summer of Black uprising last year, we are elated to share this story with a theatrical release. This Chicago story resonates with communities throughout the world, as more and more citizens organize for Black liberation. We must continue to uplift Black feminist leaders like Janaé and Bella, and we look forward to engaging with the people, organizations and partners through our screenings, talkbacks, and panels. – Ashley O’Shay

About the filmmaker – Ashley O’Shay (Director/Producer) is a director-DP based in Chicago, IL, whose work focuses on illuminating marginalized voices. She has collaborated with a number of national brands, including Nike, Vox, Wilson Tennis, and Dr. Martens. Most recently, she filmed an international commercial spot for Wilson Tennis, with over 1M views in digital markets. In 2020, she captured the final episode of Dr. Martens’ “Tough As You” series, starring the band Phony Ppl, accruing over 65K views on social and web. Her work also appeared in the critically-acclaimed Lifetime docuseries, Surviving R. Kelly. Although she has crafted many short films, Unapologetic is her first venture into the feature world. The film premiered at the 2020 BlackStar Film Festival, and was shortlisted for the International Documentary Association Awards.

“What makes Bonsu and Gambrell’s resolve so rousing is that they openly embrace the steep uphill battle they face.” – Courtney Small, POV Magazine

“An 86-minute, truth-telling syrup of a film.” – Robert Daniels, RogerEbert.com

“Ashley O’Shay gives us an intimate and candid look at two young Black women and their fight for justice in the documentary, Unapologetic.” – Carolyn Mauricette, View From The Dark

“With these young women putting their bodies and minds on the line in the fight for justice, looking at their personal lives is just as meaningful.” – Arionne Nettles, Chicago Reader